Four Seasons mixologists from Mauritius to London offer up their favourite winter warmers just in time for your holiday gathering.

6 Cocktails You’ll Be Craving This Winter

As the temperature drops, Four Seasons cocktails can always warm the mood – no matter where you happen to be.

Cosy interiors of wood and stone surrounded by fresh powder and expansive mountain views are always memorable. But they’re downright magical with the perfect festive cocktail. The same can be said of overwater bungalows, sunsets and starlit nights.

No matter where you choose to celebrate, here are the must-have drinks for the festive season. Cheers! 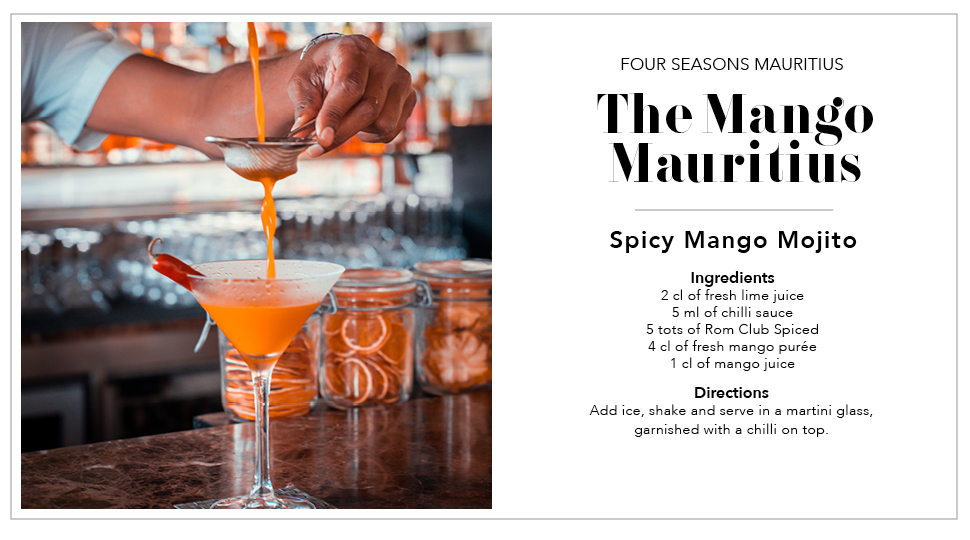 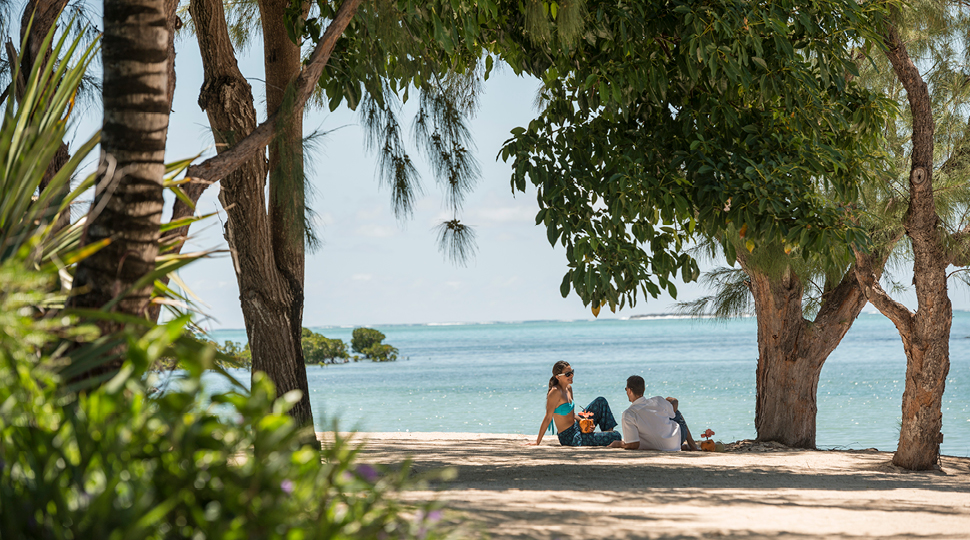 Warm, azure waters invite you for a swim in Mauritius. 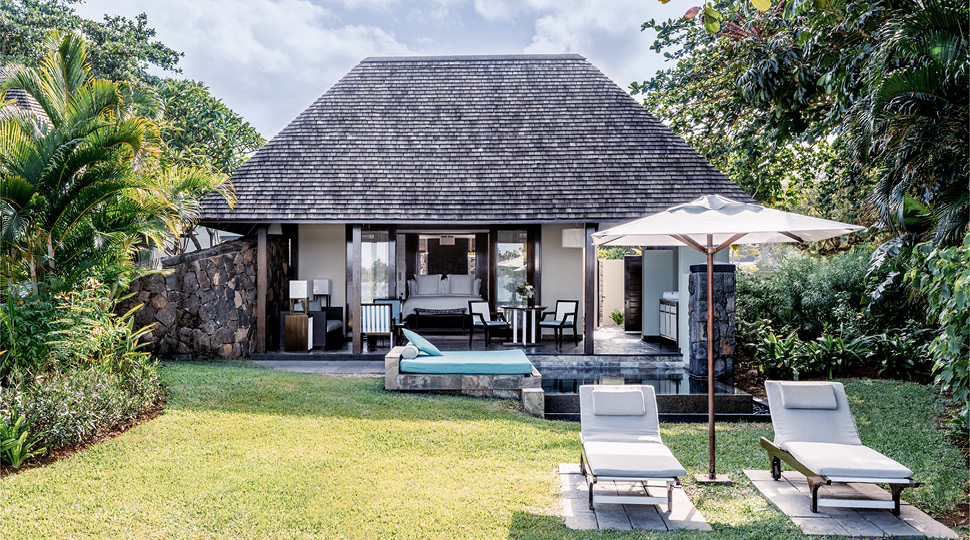 Palm trees and bright-blue sky come standard with private gardens, as do plunge pools, at the Resort.

Mangoes are abundant all winter long in Mauritius. David Iyapah, Bar Manager at
Four Seasons Resort Mauritius at Anahita, recalls that as a boy on the island he would pick ripe mangoes for homemade juice. The memory inspired him to create this riff on the mojito. He says his version is different from the classic as it has a spicy hit to it from the fresh lime juice and chilli top-up. He also uses Mauritius Rom Club Spiced rum, a blend infused with tropical spices and notes of tropical fruits.

“The idea was to create an easy-to-drink cocktail that had a kick to it,” he says. “And chillies are omnipresent in Mauritian cuisine, so I took inspiration from that.” The result is a layered cocktail with a bit of heat tempered by the sweetness of the mangoes and notes of local spices from the Rom Club. “This drink is perfect for those who want to step out of their comfort zone and add a little bit of chilli kick to their usual drink order,” he says. 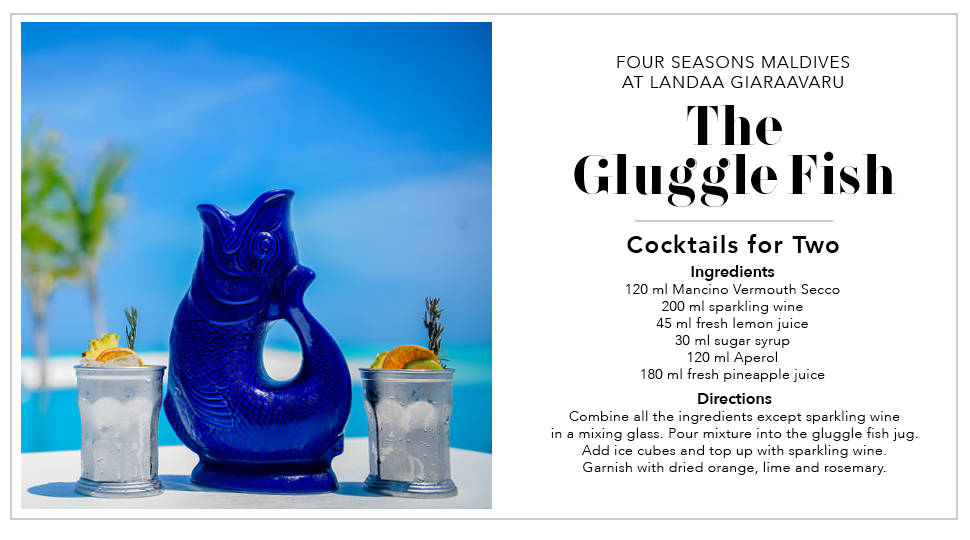 Sip tropical cocktails at Blu Beach Club while looking onto the blue lagoon. 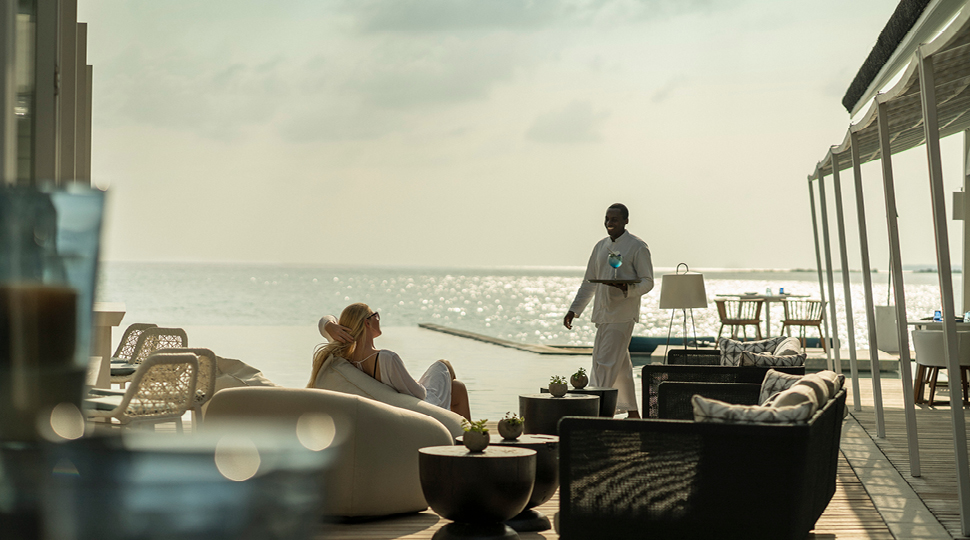 You can also order wine, cocktails and refreshing drinks throughout the day at the Poolside Bar. 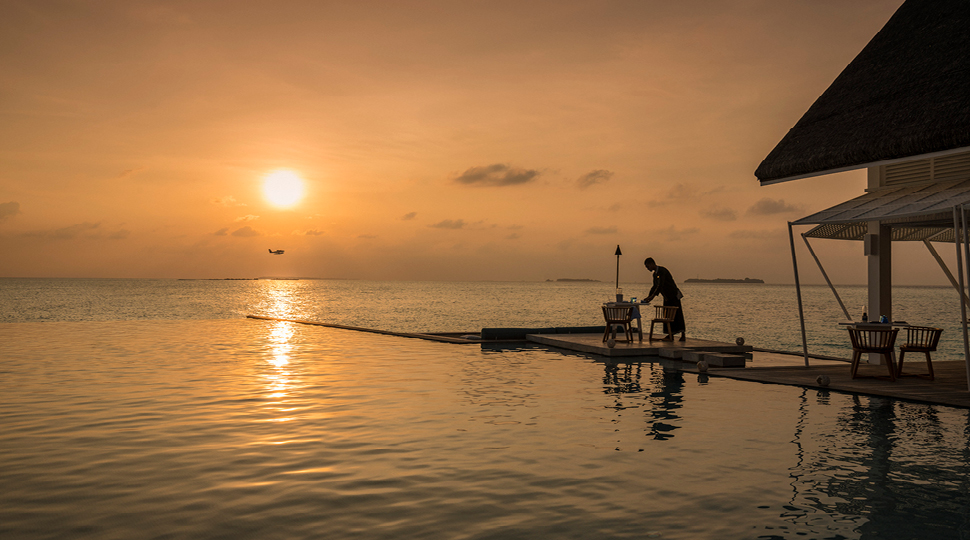 Admire the turquoise waters beneath you and the sunset above at Four Seasons Resort Maldives at Landaa Giraavaru.

The cocktail menu had to live up to the wow factor of the bar, including its optic-fibre–lit “constellation” pool, treetop dining, VIP cabanas and resident DJs, says Eddy Sugiri Haryono, Food and Beverage Manager of Blu Beach Club. Gluggle jugs are fish-shaped water jugs that produce an amusing “glug glug” sound when liquid has been poured out. The team chose a bright blue jug to tie into the theme of the bar. As for the beverage within, “It’s a drink meant to be shared with a friend or loved one,” Sugiri Haryono says. 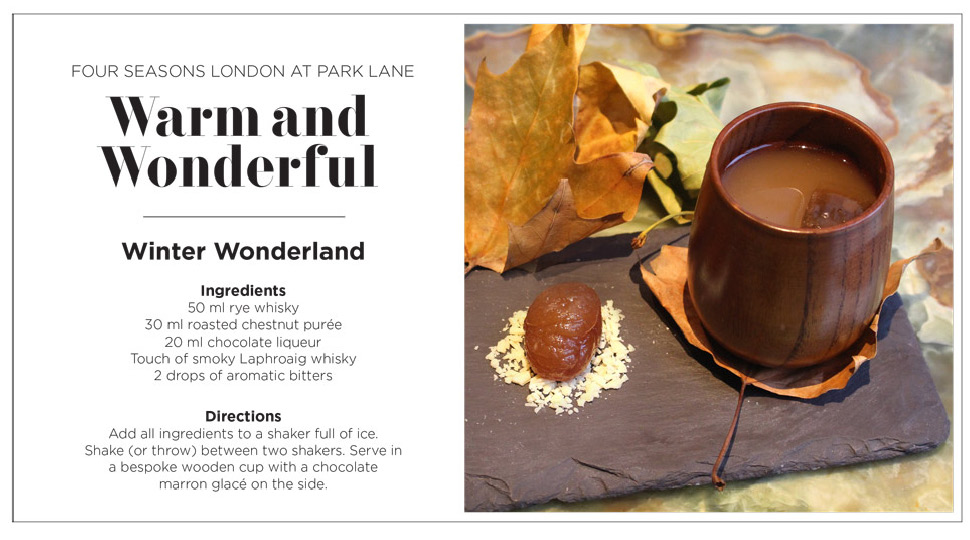 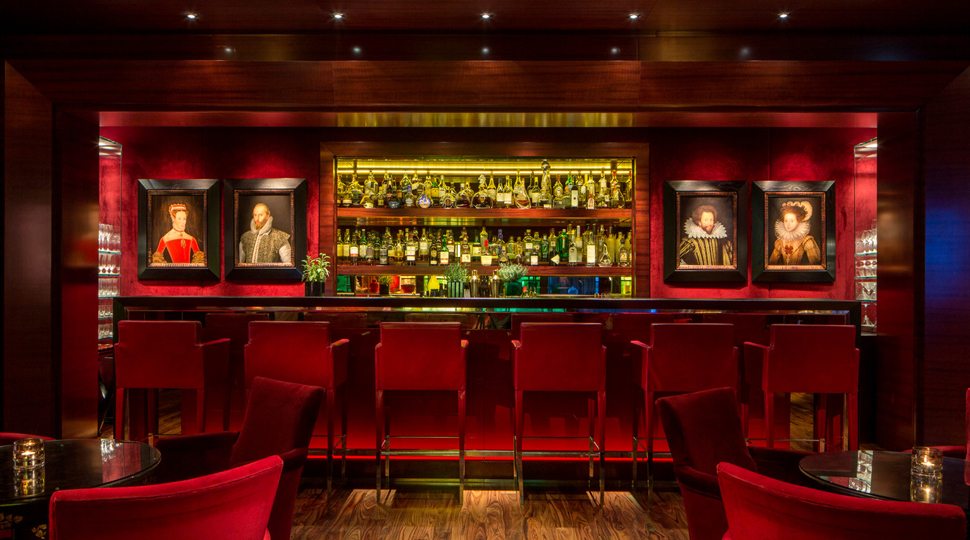 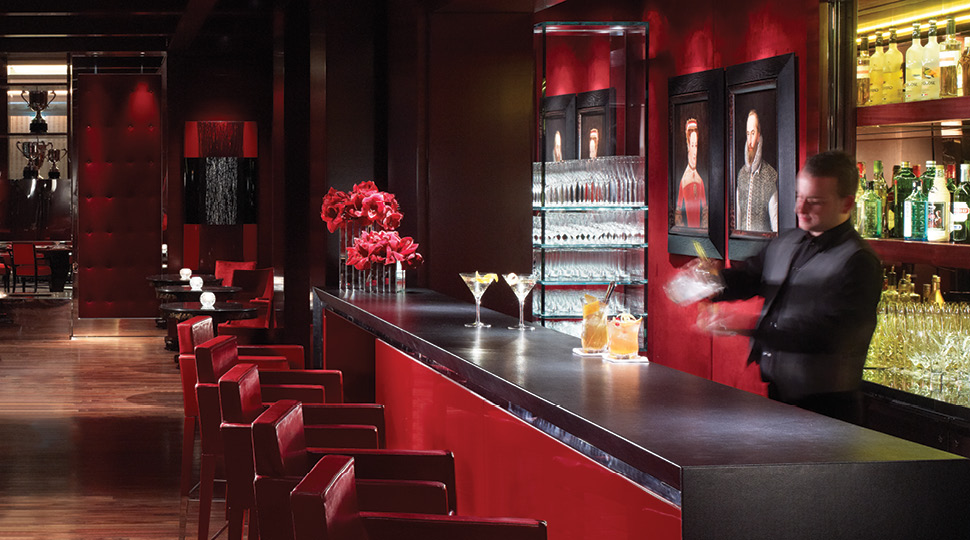 Amaranto Bar, at the heart of Four Seasons Hotel London at Park Lane, features rich claret tones, dark wood panelling and an eclectic collection of portraits. It’s casual yet elegant – a perfect spot for relaxing with a cool-weather cocktail like the aptly named Winter Wonderland.

“This cocktail captures the feeling of excitement experienced around the city during winter combined with the traditional flavour of roasted chestnuts,” says Lucia Massenzio, a rising star at Amaranto Bar. For a show and a drink, have a seat and watch the Hotel’s mixologists shake their seasonal cocktails. Prefer wine? Take your pick from the exquisite wine wall that runs along both sides of the bar. 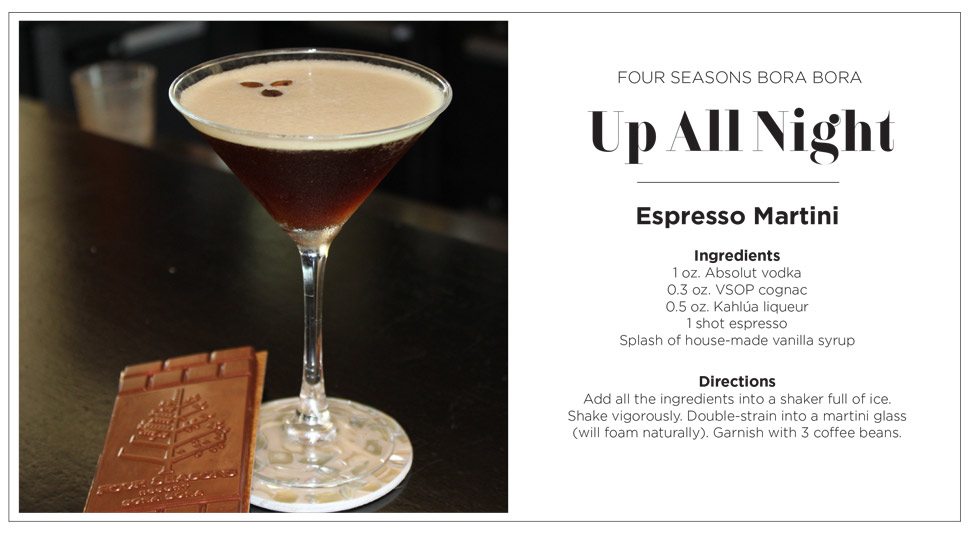 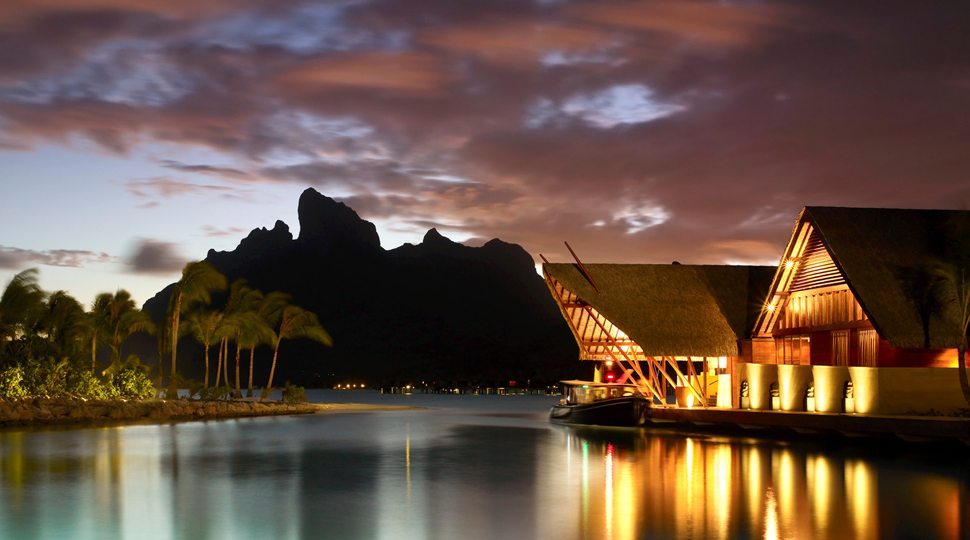 At Sunset Restaurant & Bar, take a seat indoors or on the overwater terrace. 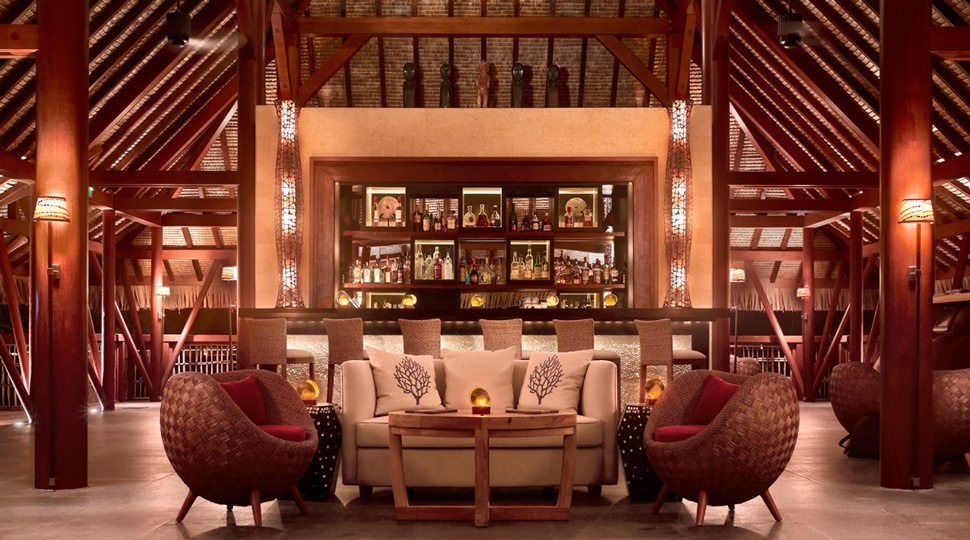 “One way to survive a sleep-inducing plate of holiday food is to sip an after-dinner espresso martini or two,” says Vainui Commings, Bar Manager at Sunset Restaurant & Bar. “This assures there will be plenty of energy for dancing and storytelling.” The Resort’s Espresso Martini includes cognac as well as locally made vanilla syrup to infuse the drink with the flavours of French Polynesia. It’s the perfect cocktail for New Year’s Eve, when you’ll marvel at the display of fireworks over the Resort’s starlit lagoon. 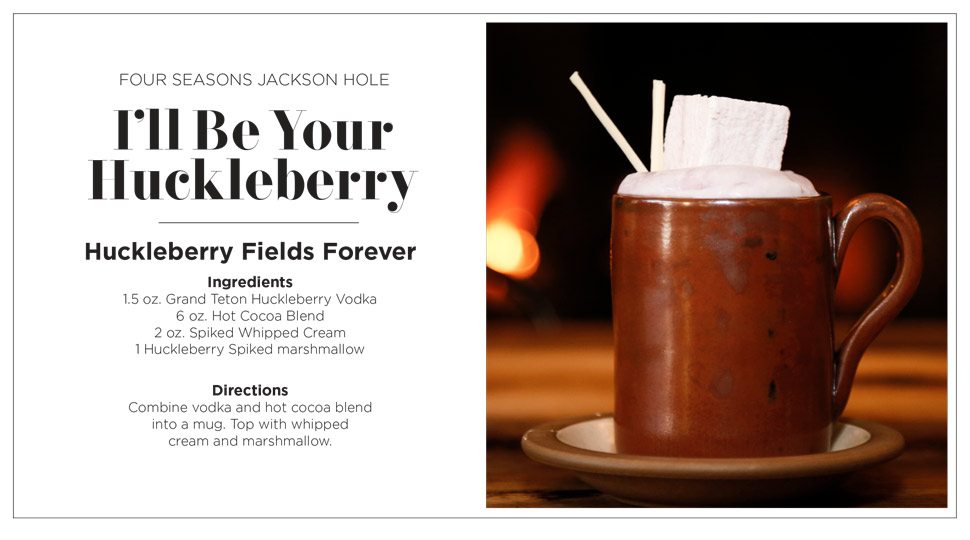 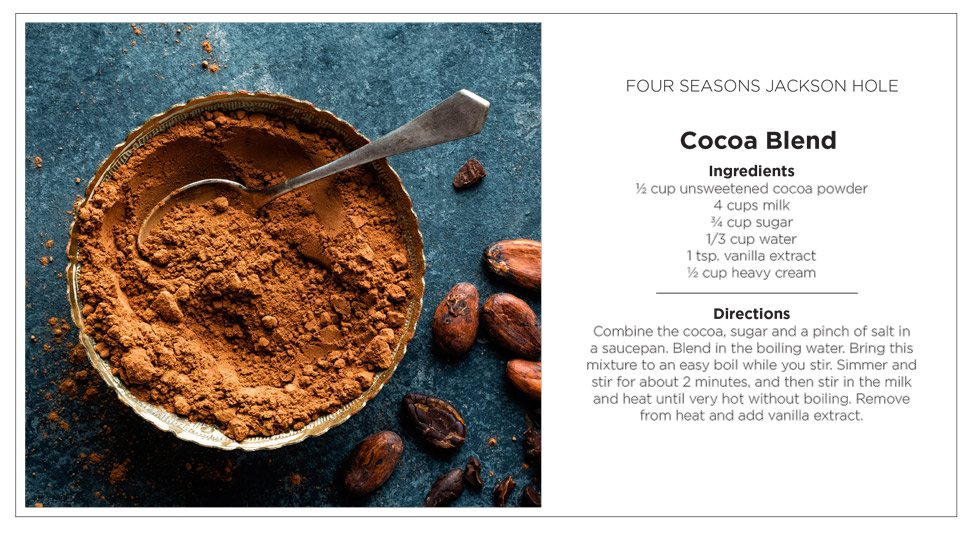 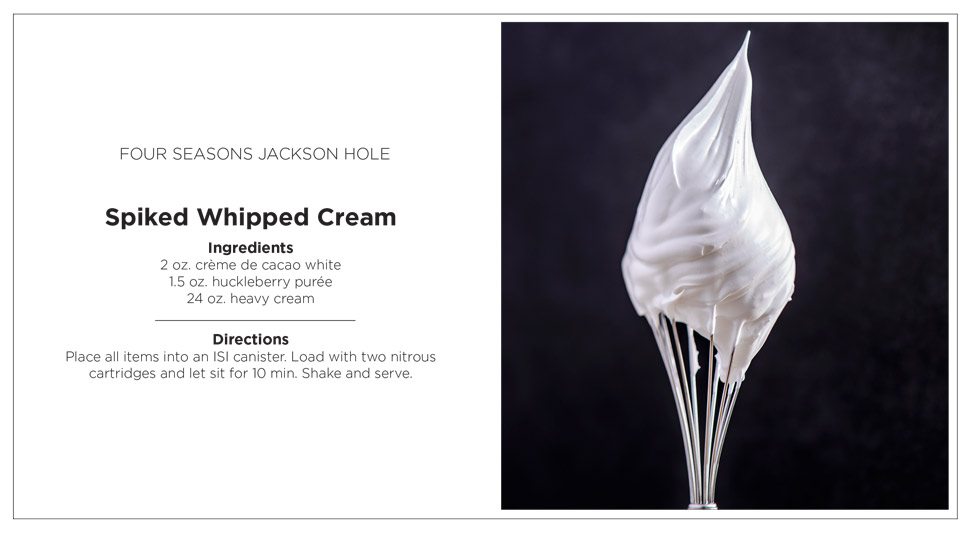 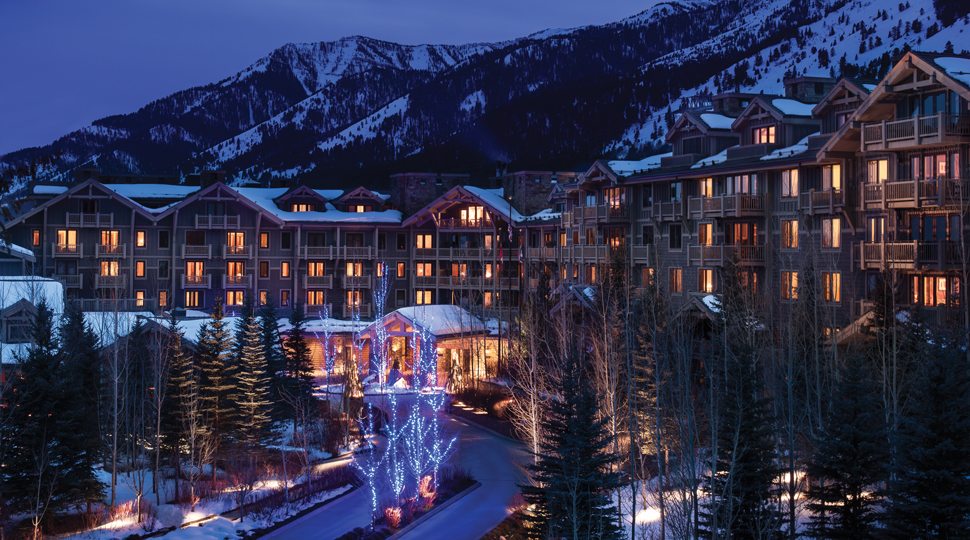 Count on the mountain air to enhance the flavours at Four Seasons Resort and Residences Jackson Hole. 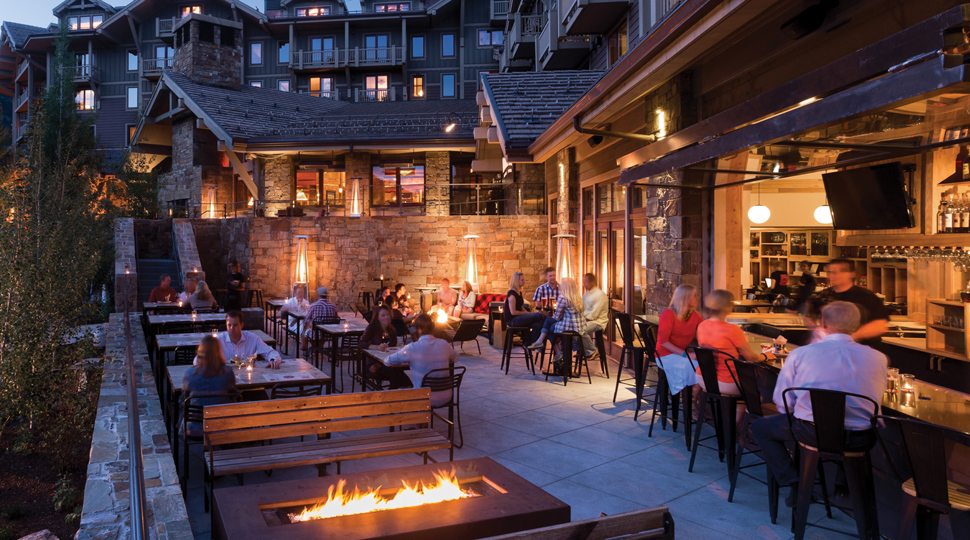 In addition to festive cocktails, The Handle Bar offers beers, whiskeys and provisions for hungry skiers.

Hot chocolate is a winter staple for almost everyone. But William Harrison, General Manager at The Handle Bar at Four Seasons Resort and Residences Jackson Hole, loves serving this treat year round. In fact, it was during BBQ.Bluegrass.Bourbon – an annual summer event with smoked ribs, pulled pork and bluegrass – that he began thinking about adding huckleberry moonshine to the sweet treat.

“Everyone loves raspberry dark chocolate,” he says, and huckleberry’s flavour profile is similar to raspberry’s. But as Harrison began exploring the idea, he found bourbon and moonshine made the beverage taste too alcoholic and sweet. “I picked up local huckleberry spirits and played around until it had just the right balance of sweet and sour,” he says. The drink also has a festive purple hue to it, evoking the aesthetic of fresh huckleberry.

You’ll also want to try the Resort’s Light My Fire, hot cocoa infused with Kahlua and house-made Fireball. “We start by toasting cinnamon sticks and creating a cinnamon syrup that is steeped overnight,” he says. “Cayenne pepper is added and strained, and it is finished with Bulleit rye.” You can even buy the cocktail by the flask to take it out on the mountain with you. 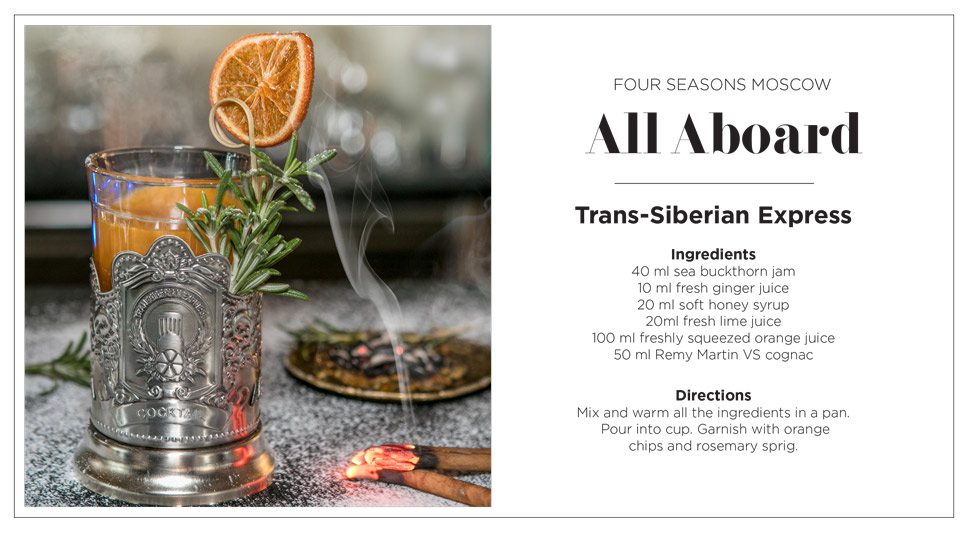 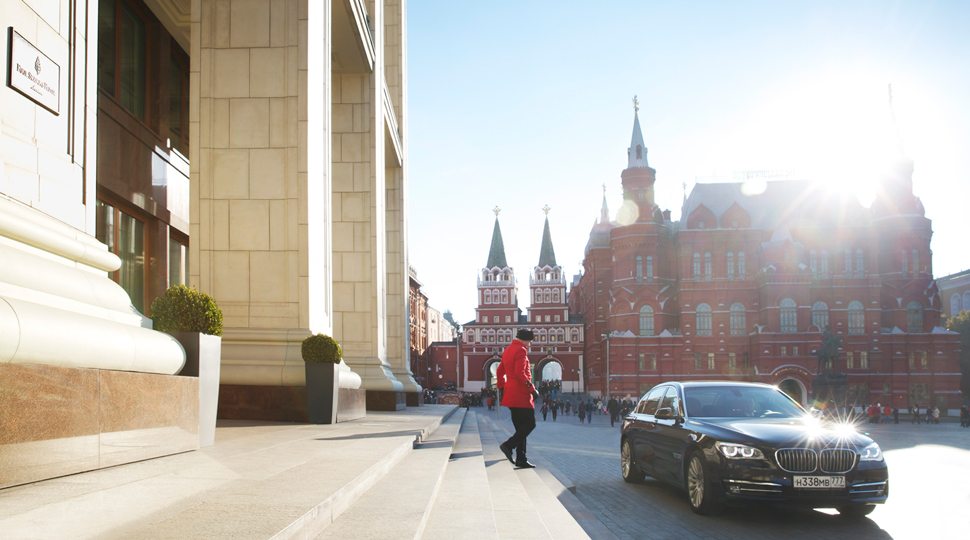 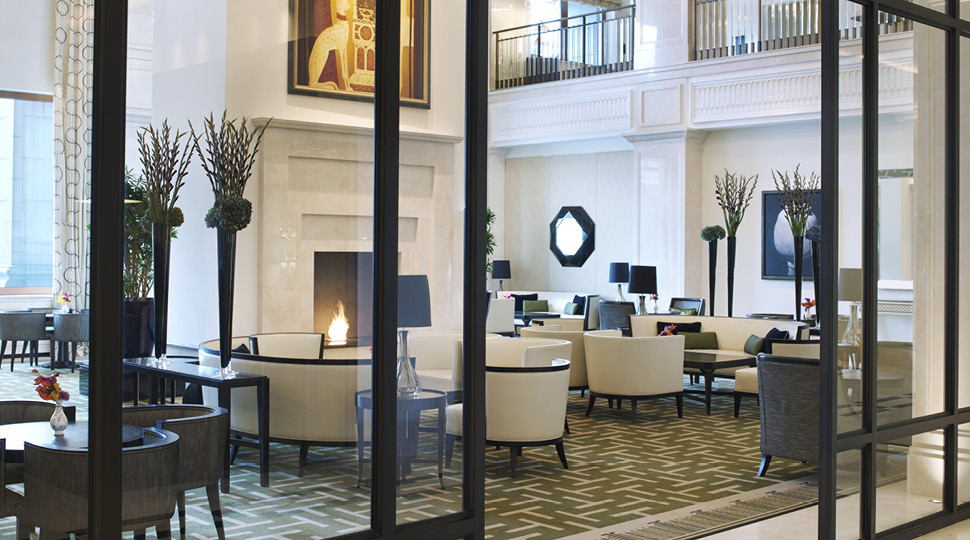 The 5,772-mile (9,289-kilometre) ride between Moscow and Vladivostok on the Trans-Siberian Railway is legendary. In fact, it’s arguably the greatest train ride in the world.

Still, anyone lucky enough to make the long trek knows it can be tiring. “You need a strong cocktail that’s full of vitamins to help you on your travels,” says Alisa Khaidarova, Bar Manager at Four Seasons Hotel Moscow.

Which is why mixologists at Silk Lounge have created a cocktail that honours the journey: the Trans-Siberian Express. The sharp flavours of Asian ginger, Russian sea buckthorn and rosemary mingle in a traditional railway cup of faceted glass contained by an ornate metal cupholder.

Like the Trans-Siberian Railway itself, the bar is an international affair. Wherever they’ve come from, patrons look out on Moscow’s iconic cityscape, including Red Square, Manezhnaya Square and the Kremlin.

Where will you enjoy your next festive cocktail? 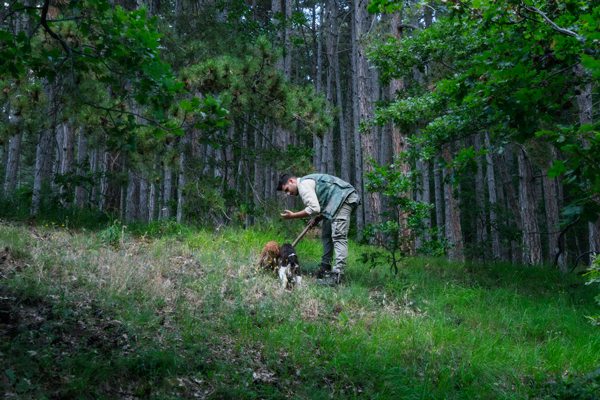 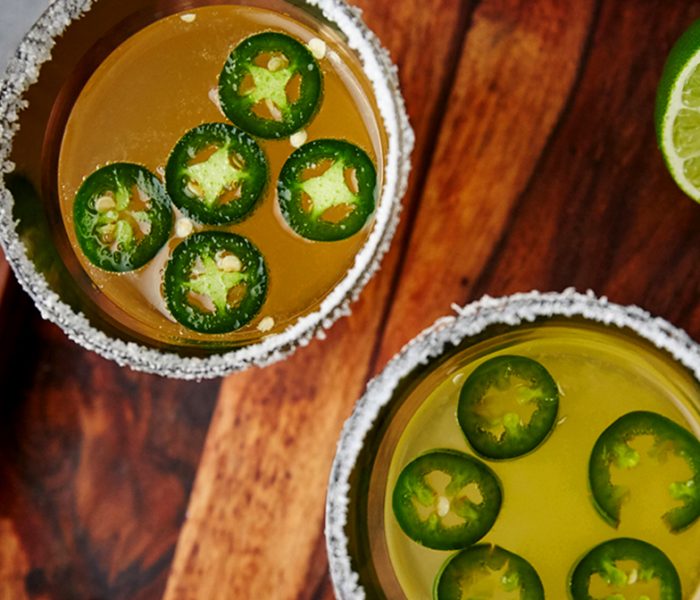 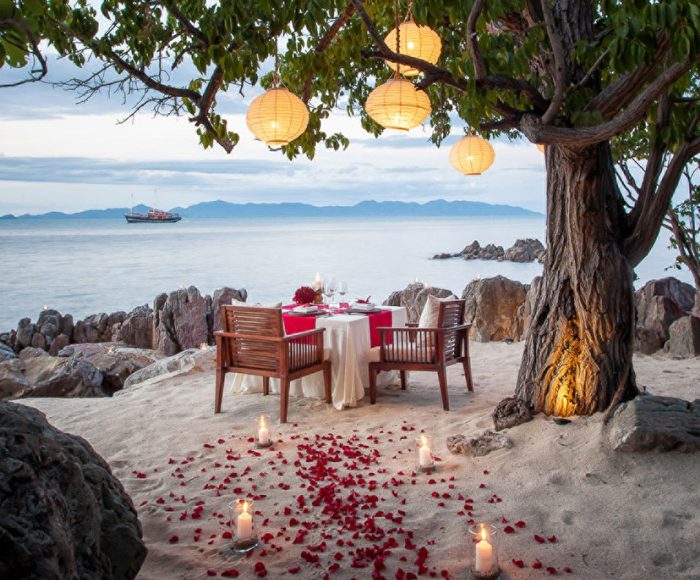 10 Places to Eat on the Beach

Four Seasons mixologists from Mauritius to London offer up their favourite winter warmers just in time for your holiday gathering.