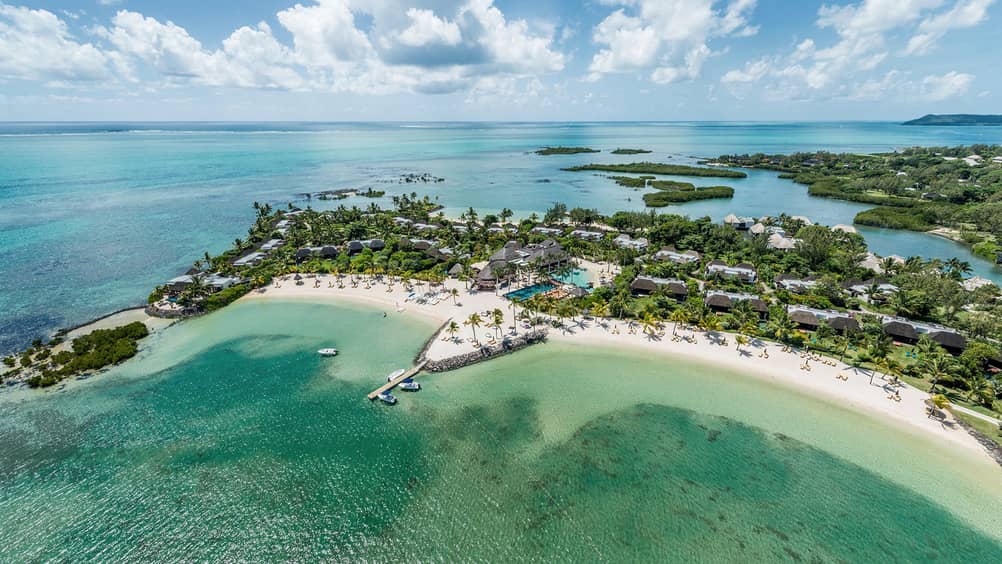 Mauritius is known for its stunning landscapes and gorgeous beaches, but the African island is also a cultural destination, with a rich history and two UNESCO World Heritage Sites.

With two UNESCO-inscribed sites and a rich local history, the African island of Mauritius is a destination for cultural exploration. Beyond the colourful villages, lush green mountains and peaceful beaches—one aptly called Quiet Beach—can quickly make naturalists out of urbanites, offering opportunities for adventure, romance and relaxation in the most tranquil of settings. To help you make the most of your next visit, we asked Merlin Armance, Concierge Manager at Four Seasons Resort Mauritius at Anahita, to share his tips for experiencing this magical destination.

This intimate island destination boasts a rich and diverse culinary scene. To experience local flavour, take a tour of Mauritius’ beach towns, starting with Bel Air, where you can indulge in a piaow—a sweet treat that’s similar to a doughnut. Take a trip to the famous tea plantation of Bois Chéri, where you will learn about the island’s tea heritage and its famous vanilla blend. Stay for lunch at Le Bois Chéri Restaurant and sample Mauritian delicacies such as chicken in green tea sauce; grilled fish fillet with lemon butter sauce; and the local Saint Aubin 1819 passion fruit rum. 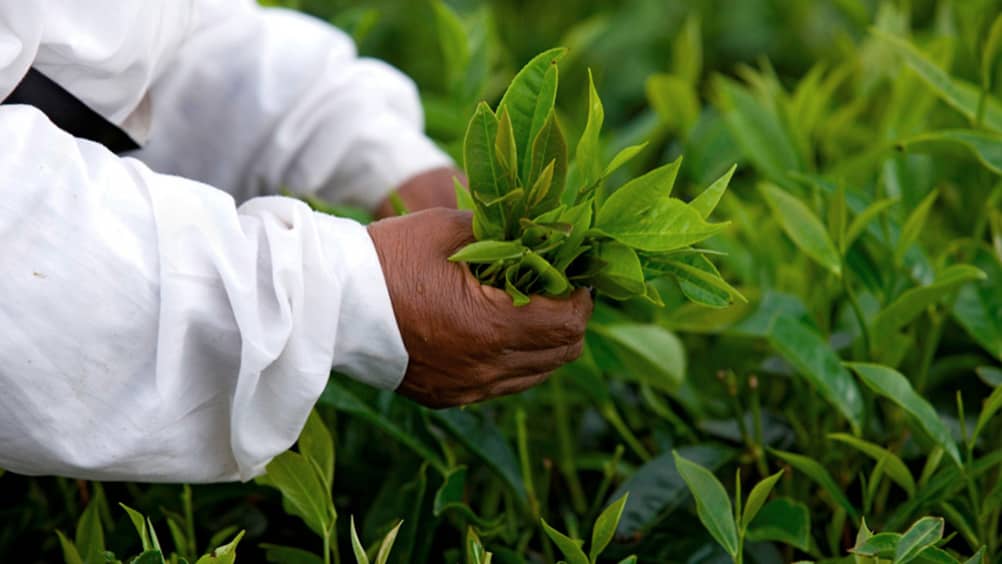 The island’s long tradition of tea production is on full display at Bois Chéri, where you can explore the plantation, sample its famous vanilla blend and stay for lunch at the on-site restaurant.

Continuing north on your journey, pick up a roadside refresher in the form of a fresh coconut or sugar cane juice as you travel through the town of Beau Bassin–Rose Hill and into the heart of the capital, Port Louis. With the island’s unique blend of Asian, European, Indian and Middle Eastern cuisine, Port Louis has restaurants to suit any appetite.

Grand Bassin is a lake situated almost 550 metres (1,800 feet) above sea level in a secluded highland, deep in the heart of Mauritius. Not far from the lake stands a giant statue of the god Shiva, who, according to Hindu religious tradition, visited the site from India. It is said that he carried water from the holy River Ganges, which fell into the lake at Grand Bassin and created a sacred connection between the two sites. Each year Hindus in Mauritius make a pilgrimage to the lake on foot, walking for up to three days to celebrate the Maha Shivaratri festival.

Sugar cane is central to the history of Mauritius, and its fields still line the majority of the island’s roads. The Resort stands on the grounds of a former sugar cane plantation, and a smaller sugar-mill-turned-museum is an hour away. Here, visitors can see the full cycle of sugar production, beginning with the delivery of fresh-cut sugar cane and culminating with a tasting session.

A sweet tour of the island will also lead you to the destination’s most prestigious agricultural rum producer, Rhumerie de Chamarel. During harvest season (July to December) the Concierge can arrange a tour and tasting at this picturesque distillery, set on the southern part of the island amid rolling sugar cane fields.

Port Louis is home to the Champ de Mars Racecourse, the oldest horse racing club in the Southern Hemisphere. Races are typically held on Saturdays or Sundays between April and November. Also in the capital city is Fort Adelaide. Take in panoramic views of the urban landscape from the fort’s citadel, which was built by the British atop one of the city’s highest peaks.

Discover another piece of history at Aapravasi Ghat, the former immigration depot that today is one of the island’s two UNESCO World Heritage sites. Between 1834 and 1920, almost half a million indentured Indian labourers passed through this landmark for transport to plantations across the British Empire. 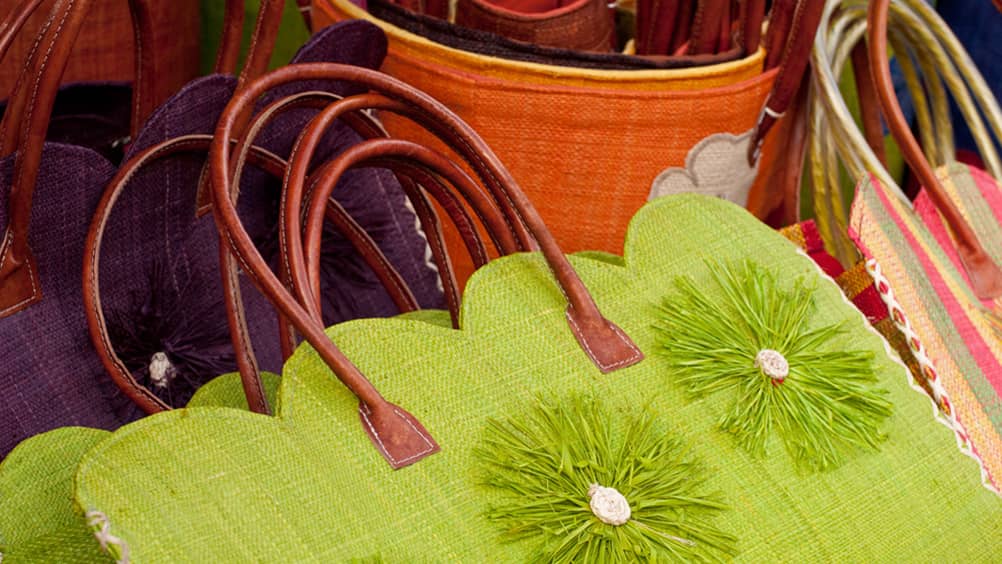 Browse the selection of handcrafted wicker bags at the waterfront shops and open-air markets in Port Louis.

Leave time to browse the open-air markets in Port Louis, which is one of the best ways to experience island culture. A vibrant selection of shops and restaurants line the docks along the city’s picturesque waterfront. Amid the hustle and bustle of the many street markets, pick up treasured keepsakes like handcrafted wicker bags, which are available in exotic colours. As Mauritius was the last home of the now-extinct dodo, a carved wooden image of the flightless bird is also a popular souvenir. 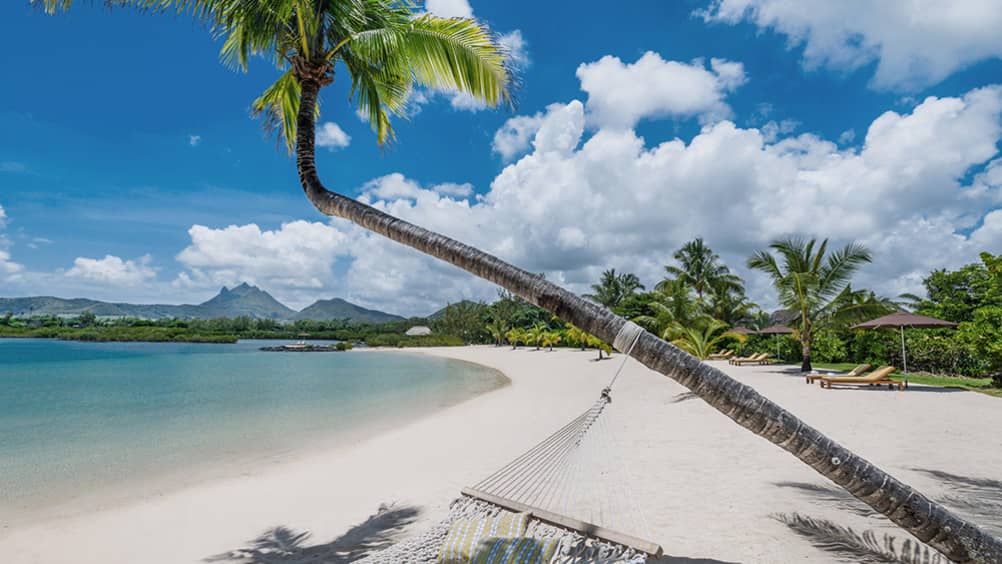 No water sports are allowed at the Quiet Beach, which makes it a romantic and restful retreat.

The Quiet Beach (no water sports activities or pools are allowed here) spans the coastline of the Resort’s private island and boasts sweeping, uninterrupted views of the turquoise lagoon that flows to the coral reef and the sea. Farther afield, the rugged outline of the Bambou Mountains provides a breathtaking backdrop to the landscape at sunset. The drive down from the mountains in Black River Gorges National Park also offers perspectives across the green-blanketed hills to the endless Indian Ocean.

Mauritius’ diverse terrain offers a plenitude of hikes, from scenic strolls to challenging climbs. One of the most fascinating walks explores the island’s second UNESCO World Heritage site: Le Morne Cultural Landscape, on the southwestern peninsula of the island. The jagged mountain protrudes into the surrounding lagoon, creating a spectacular skyline.

Water activities also keep visitors entertained; perhaps the most popular sports are windsurfing and snorkelling. Cycling at the nature reserve of Domaine de l’Etoile is an adventurous way to explore the landscape, while a round of golf on the Resort’s Ernie Els–designed championship course is another way to relish the warm island air. 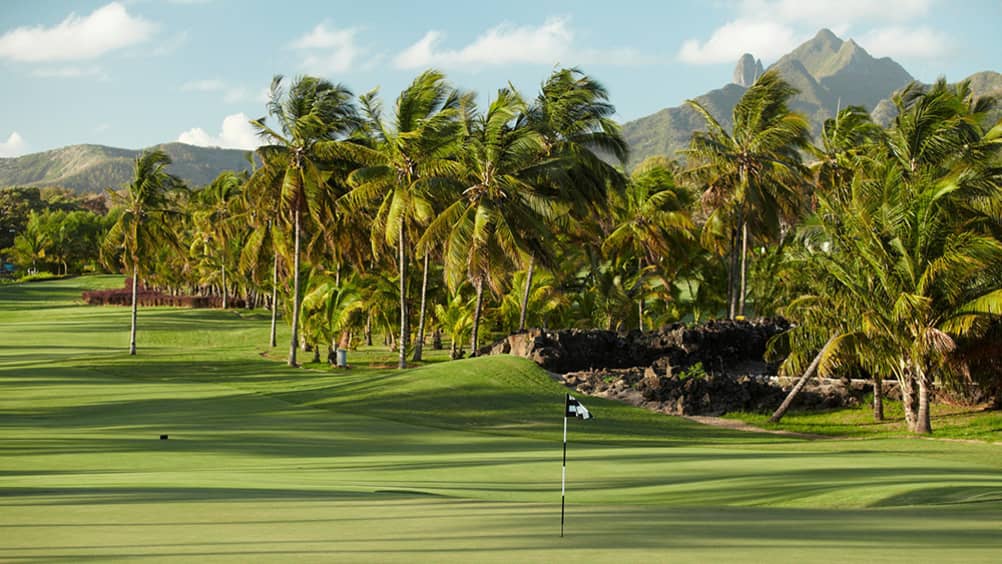 Play a round on the Ernie Els–designed championship golf course, part of Four Seasons Resort Mauritius. 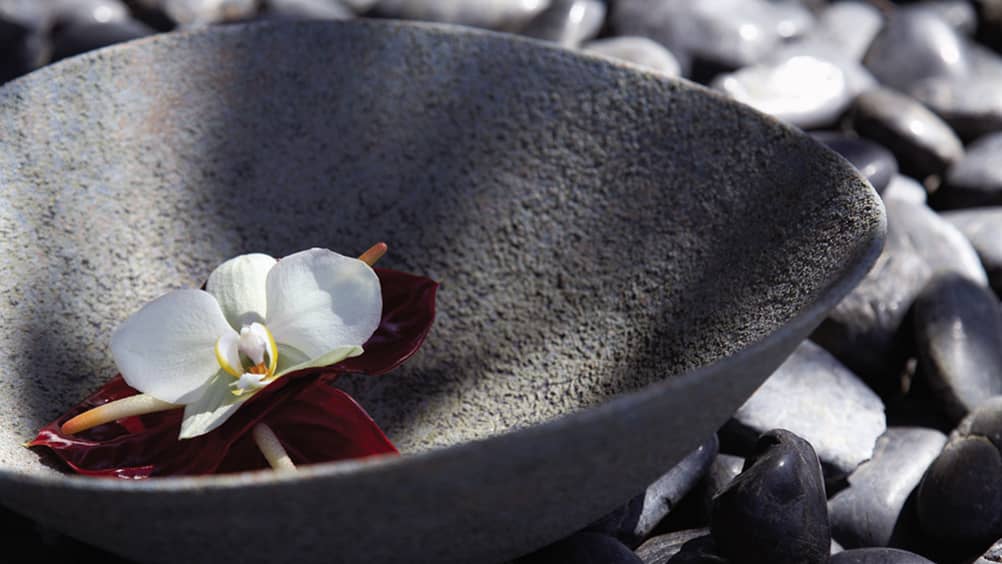 For a one-of-a-kind spa experience, book a massage on the Sea Cloud, a floating islet in the Resort lagoon.

Invoke the spirit of Africa with one of the African Rainforest Rituals at the Resort Spa. These water-based therapies are symbolic of the destination and utilize the energizing properties of the exclusive Africology product line. Post-treatment, spend a quiet hour in the Spa’s outdoor relaxation area, overlooking the lagoon and the Bambou Mountains. If you’re looking for an extended escape, make arrangements to enjoy your massage on the Sea Cloud, the Resort’s luxurious “islet” in the turquoise waters of the lagoon. The Cloud is also the perfect setting for a romantic dinner or a family day spent soaking up the sun and snorkelling in the ocean. 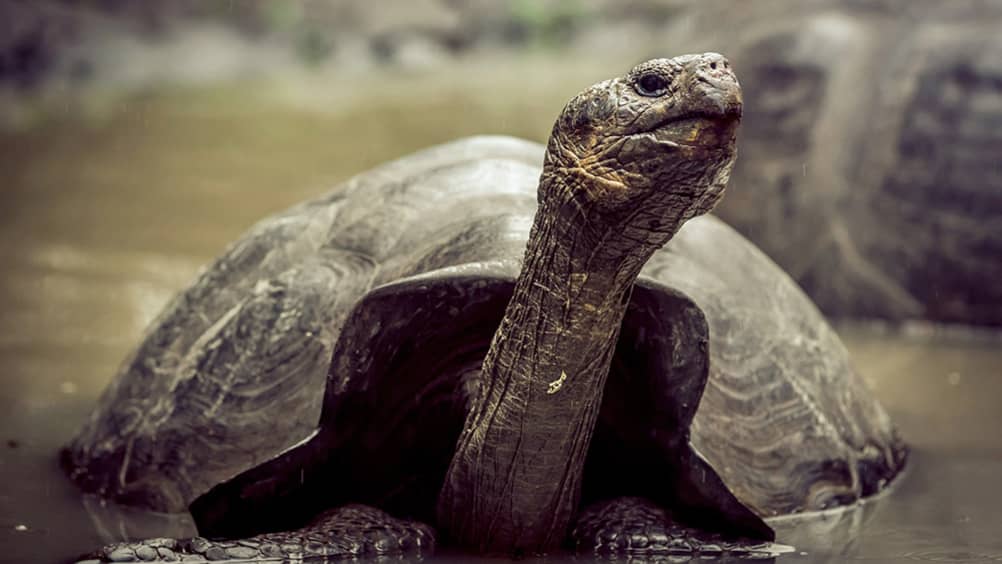 There are plenty of activities designed to help families discover Mauritius. A visit to Casela Nature and Leisure Park, on the island’s west coast, is one of the most popular experiences. Here, guests zip-line across treetops, come face to face with ostriches, zebras and deer on a Segway safari, and discover more than 150 species of birds. Nile crocodiles can be seen at La Vanille Réserve des Mascareignes, located on the southern part of the island, where kids can run free in the Jungle Adventure Playground amongst the giant Aldabra tortoises. Hobie Cat sailing is a great way for groups or families to explore the lagoon. The small catamarans, available at the Resort’s Bambou Beach, are easy to master and fun for all ages.

Île aux Cerfs is one of the most famous landmarks in Mauritius, and the island is just 20 minutes away from the Resort by complimentary boat transfer. Known for its expansive beaches, the island is a favourite destination for sunbathers and snorkellers alike. Back at the Resort, experience traditional sega dancing and Creole-spiced barbecue seafood during Zilwa Night (zilwa means “of the island”) at the beachside Bambou restaurant. A moonlit walk along the Quiet Beach makes an unforgettable end to your day of sunshine and fun. Lie back in a hammock beneath the starry skies before returning to your villa for a late-night dip in your private plunge pool. 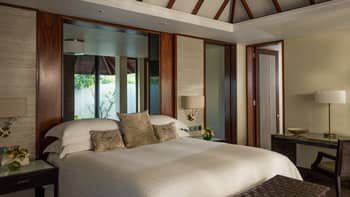 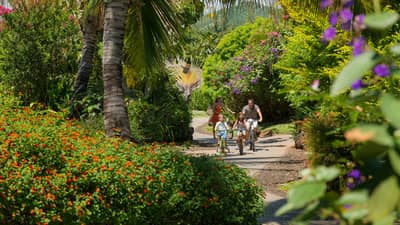 Parents’ Travel Guide: What to Do in Mauritius

Enjoy a relaxed family vacation on the white-sand beaches of Four Seasons Resort Mauritius at Anahita. 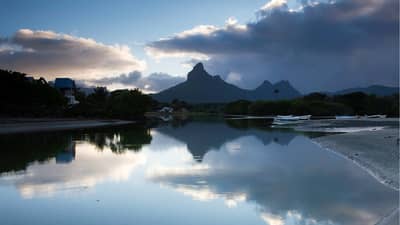 Tee off in paradise, sample diverse cuisine and explore botanical gardens on your next beach getaway.