The bride paired these lovebird figurines with handmade snow globes.

The couple pose for a portrait in the snowy wilderness.

The tables are set.

For Tara and Jeff Davidson, Four Seasons Resort and Residences Jackson Hole was the ideal setting for their heartfelt celebration. Jeff spent family vacations here as a child and had brought Tara to Jackson Hole for getaways while they were dating. His grandparents had even honeymooned in the mountain locale. Four Seasons was a natural choice for the Seattle-based pair, who had both worked at Four Seasons properties before pursuing careers in health care. “No one else can compete with the beauty of the properties and the kindness of the staff,” says Tara. There wasn’t much deliberation about the wedding date, either. “We knew we wanted a winter wedding; there’s something cosy and warm about that time of year,” she says.

The Scene: Snow covered the aisle and surrounding mountaintops while lanterns glowed against the night sky. Guests sipped hot apple cider during the ceremony, covered by blankets that were monogrammed with the couple’s initials and wedding date. (The blankets were a surprise touch from Tara’s stepfather.) To complement the natural beauty of the locale, an earthy colour palette of brown, ivory, peach and Champagne was incorporated into the reception décor. Pine cone place holders, lovebird figurines and vintage milk crates—all provided by their family members—enhanced the evening’s rustic charm.

Magical Moment: “We added our personal touch to every element of the wedding,” says Jeff. This was especially true of the intimate fireside feast. The tables were decorated with Champagne-coloured linens, flickering candles and white blooms—as well as a bevy of comfort food. “My mother passed away 10 years ago, and we wanted something special just for her, so our chef prepared my mother’s meatloaf (her exact recipe) as one of the main dishes,” says Tara. The family-style dinner also included lobster bisque, fried chicken and mac-and-cheese. “It was the perfect feel-good food for a cold day,” says Tara.

The Bride & Groom: The couple attended the same preschool, though Jeff is the only one who can recount their time together there. He fondly remembers Tara’s blond hair sticking out in every direction. It wasn’t until their mid-20s that they become reacquainted when Tara moved to Seattle. They dated for five years before Jeff popped the question on Tara’s 30th birthday. After a romantic dinner, he brought her to Kerry Park—a place they had visited when they were first dating—to look out over the Seattle skyline. Initially disappointed, as she’d hoped for a visit to her favourite yogurt shop, Tara was delighted when Jeff proposed.

The Bride Wore: Tara chose a strapless Alvena Valenta ball gown with delicate floral appliqués that reminded her of snow falling. She paired it with peach J. Crew Mona pumps (though she also brought along her boots for the snow) and a white cardigan from BHLDN. The bride and bridesmaids carried unstructured bouquets of peach and white blooms.

The Honeymoon: The newlyweds continued the merriment in Jackson Hole because, as they say, “Why go anywhere else?” They spent their days skiing on the slopes and their evenings relaxing in the hot tub, often with s’mores in hand. 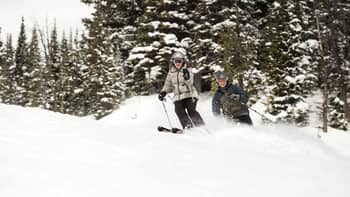 Burlap, pine cones and doilies make an inviting setting for the guest book.

The bride’s veil is the finishing touch,

The bride pins her grandmother’s lovebird brooch to her bouquet.

Guests leave messages in a bottle for the couple.

The couple is all smiles.

Wooden signs with twine and blooms mark the newlywed table.

Guests campaign for the happy couple.

The after-party continues over fire pits.

The band performs during the reception.

The bride and groom take advantage of a playful photo opportunity.

The couple walk towards the mountains. 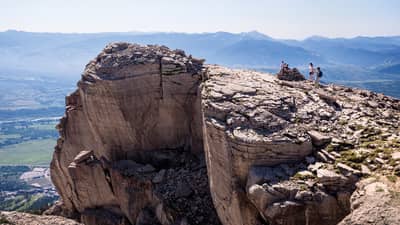 Things to Do in Jackson Hole With Kids

Embark on a wildlife safari, search the night sky and explore the Teton mountain range on your next family adventure. 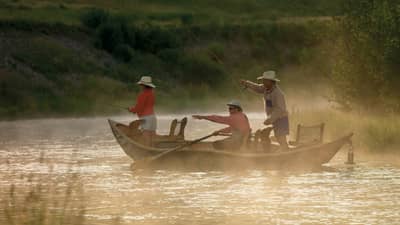 The Chef Concierge at Four Seasons Resort and Residences Jackson Hole shares travel tips to make your stay memorable—from fly-fishing and hiking in the summer to the best skiing and snowboarding in the winter.