For the ceremony, Mina wore a traditional white wedding gown.

The newlyweds make their glamorous debut.

Striking centrepieces with red blooms add to the reception’s elegant yet modern ambience.

When it came time to plan their wedding, Mina and Lone wanted to break away from tradition. Their search for a chic venue with modern touches led them to Four Seasons Hotel Shenzhen, a contemporary urban escape in one of China’s most cultural destinations. “The Hotel’s unique rooftop—multi-level terraces with landscaped greenery and a courtyard—created a welcoming sight for our friends, a truly contemporary green oasis amidst the skyscrapers,” says Mina.

The Scene: Mina and Lone chose to decorate the Hotel’s sophisticated ballroom in black and red, which for them channelled romance and passion. “My husband used to be a rock ’n’ roll singer, so we chose black as a classic colour representing him, and I love red,” Mina explains.

The Bride and Groom: Mina first met Lone during an occasion where he was the event planner and she the choreographer. Years later, their paths crossed again, and the connection was chemical. Lone proposed to Mina with a letter that said, “If two people are meant to be together, eventually they will find their way back.” “It was very touching,” Mina recalls.

The Bride Wore: Mina wore three different dresses during the couple’s wedding celebration. The first was a Chinese-style dress, worn for the traditional tea ritual with the couple’s families. Then, after walking down the aisle in a white wedding gown, Mina donned a red Vera Wang dress to match the reception theme.

A Personal Touch: The couple chose to stay at the Hotel on their wedding day, where they were met with an authentic Chinese tea set to celebrate. Other romantic touches included Champagne and dessert. 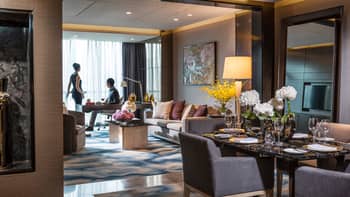 Restart Your Time with Four Seasons

From a dining credit equal to 50% of your daily room rate to exciting experiences, welcome amenities, more, we're giving you eight reasons to join us for a spring getaway.

The bridesmaids wear light pink to signify nature and gentleness.

The groom catches a glimpse of his lovely bride.

In Chinese tradition, couples serve tea to their families on the wedding day.

Mina wears a special gown for the tea ritual.

The bridal bouquet is made of vibrant red roses.

A touching hug between the bride and her mother

The couple serve Chinese tea to their parents.

The couple pose with their family.

A groomsman lets loose during Mina and Lone’s chic celebration.

Lone waits for his wife-to-be.

In keeping with the colour scheme, red and black balloons are released during the outdoor ceremony.

The bride and groom share a kiss as husband and wife.

A DJ spins tunes for the happy couple and their guests.

The wedding party excitedly jumps for the new bride and groom.

The sophisticated ballroom at Four Seasons Hotel Shenzhen is the ideal venue for the bride and groom’s vision.

The happy couple after the ceremony

The venue has been transformed to feature a runway where the couple make their star-studded entrance.

Even the youngest guests are all smiles while celebrating Mina and Lone.

The newlyweds perform a special Champagne toast together.

A black garter beneath the bride’s striking red gown serves as one more nod to the wedding’s colour scheme.

Mina stuns in a claret red Vera Wang gown, her third dress of the day. 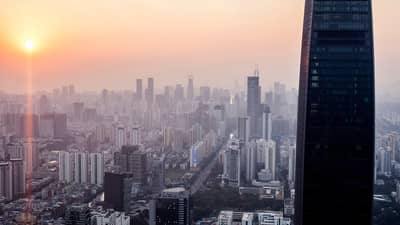 From a burgeoning arts scene to China’s best golf courses, here’s why you should make Shenzhen your next travel destination. 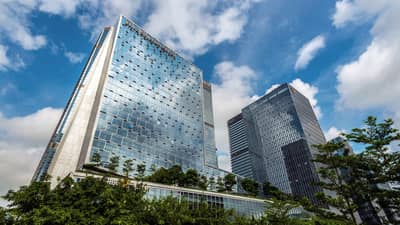 The Concierge at Four Seasons Hotel Shenzhen shares tips to make your stay memorable, including where to shop, eat and have fun in Shenzhen.