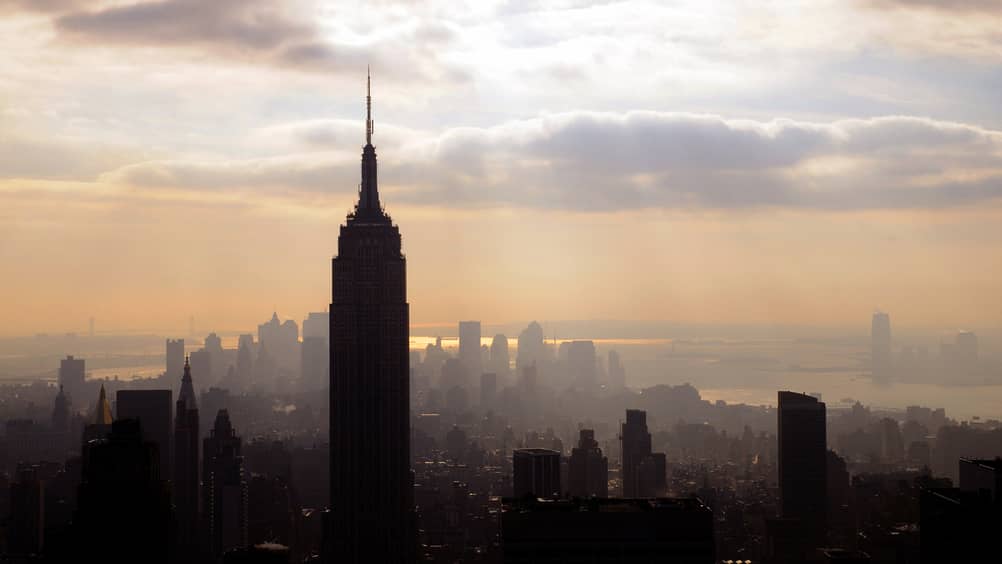 An epicentre of global fashion, food, culture and art, New York City offers one-of-a-kind experiences for all types of travellers.

New York City pulses with energy day and night thanks in part to its ever-changing arts scene, vibrant restaurants and variety of shopping options. To help plan your next trip to the Big Apple, we asked Josephine Danielson, Chef Concierge at Four Seasons Hotel New York, to share her tips for experiencing the very best of the city. 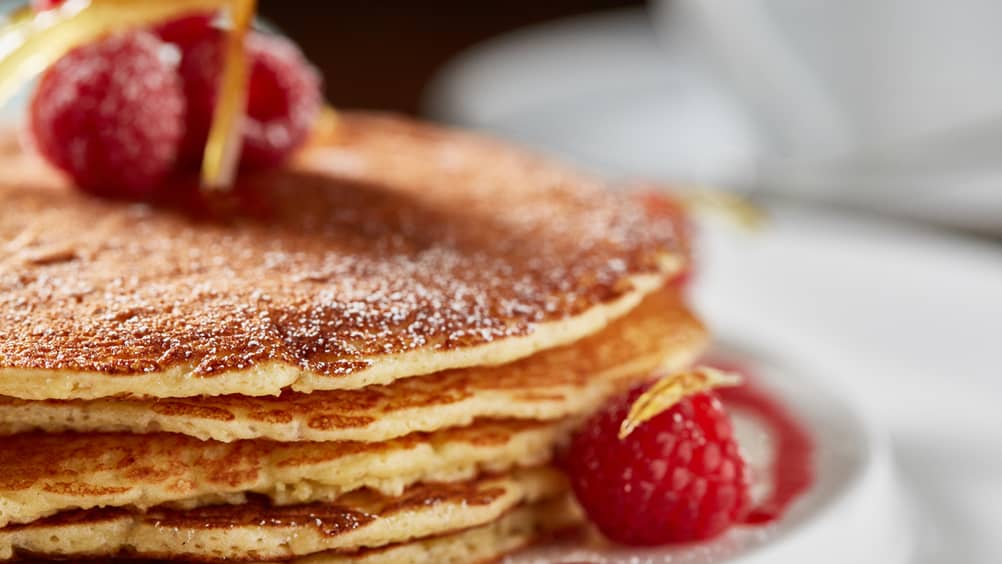 For fabulous breakfast, lunch and weekend brunch dining, The Garden offers exceptional menus, each featuring local ingredients and taking the mantra of “Eat Drink Local” to heart. Four towering African Acacia trees provide a dramatic, enchanted, forest-like restaurant setting and the over-sized windows allow the warmth from the morning sunlight to shine through. Try one of the signature dishes, including Lemon Ricotta Pancakes and the Shredded Kale Salad.

For evening New York dining options, head downtown to the Meatpacking and SoHo neighbourhoods. Shareable seafood dishes make up the menu at Catch, which includes signatures such as scallop gnocci and Cantonese lobster. After dinner, head upstairs to the rooftop lounge for cocktails and panoramic views of the Meatpacking District. Located in the heart of the neighbourhood is STK Downtown, a modern steakhouse set in a chic lounge environment—complete with dramatic lighting and a DJ.

For a more intimate dining experience, head to Locanda Verde, a casual neighbourhood tavern that boasts soulful Italian cuisine. Enjoy an al fresco brunch on a sunny New York day, or try a specialty Italian beer at the inside bar. Owned by the same people as Locanda Verde, The Dutch offers a change of pace where you can dine on comfort food and sip on a cocktail blended with one of the restaurant’s many type of whiskies. You won’t soon forget a dinner at Chelsea’s Morimoto, a restaurant by renowned Iron Chef Masaharu Morimoto that serves contemporary Japanese fare, including kakuni—a 10-hour prepared pork dish served with a soy scallion jus.

The Flatiron and Union Square neighbourhoods also offer a variety of dining options with local and seasonal touches. ABC Kitchen features a changing menu that is locally sourced and globally artistic, while Tocqueville serves French-American cuisine with seasonal ingredients from the Union Square Greenmarket. Try the signature prime cuts at Strip House, one of the best steakhouses in the city. 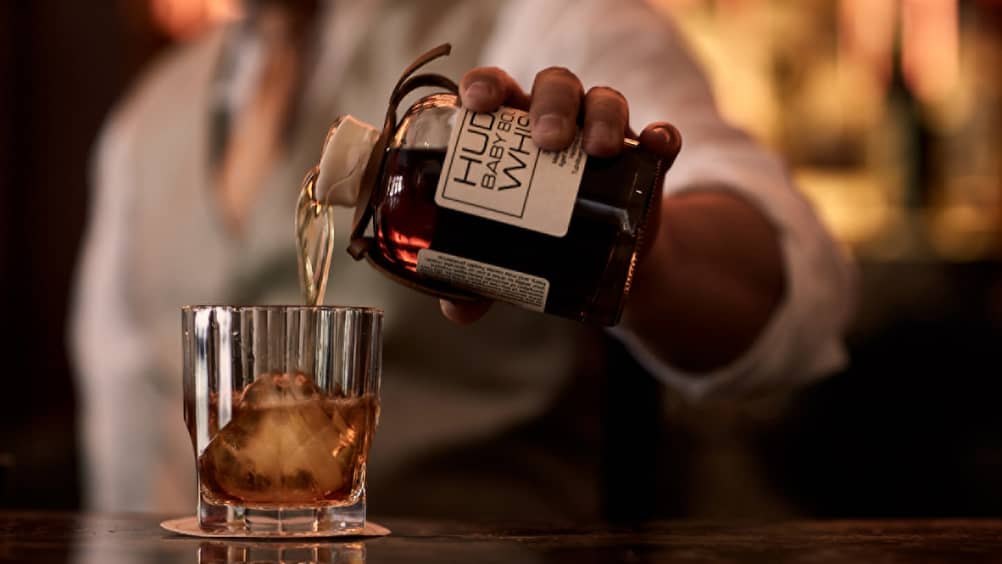 Chef John Johnson and his team at Four Seasons Hotel New York work closely with local producers on a regular basis, and both the beverage and food program are reflective of their efforts to frequently source ingredients from as many neighbouring purveyors and producers as possible.

Ty Bar offers guests an exciting opportunity to try a uniquely batched gin, made exclusively for Four Seasons Hotel New York in partnership with Prohibition Distillery, considered one of New York’s best distillers of fine American spirits. If you have a palate than prefers darker spirits, try Ty Bar’s own unique batch of Hudson Baby Bourbon, made in collaboration with Tuthilltown Distillery, New York’s first whiskey distillery since prohibition. The original bourbon blend created exclusively for the Hotel was selected from six different barrels and vintages in order to create a batch that was reflective of the character of Four Seasons Hotel New York.

Men shouldn’t miss Bond Street’s Billy Reid. The Alabama-based designer is noted for his modern menswear designs (the CFDA named him Menswear Designer of the Year in 2012), but his collection also features apparel and accessories for women. Be sure to also visit shirt-maker Thomas Pink and Italian suit designer Zegna. In need of a trim? Try Martial Vivot for a shave, haircut or a full day of pampering.

Women will find whatever their hearts desire on Madison Avenue. Go for stylish, preppy attire at J.Crew, French designer fashions at Sandro or contemporary urban wear at Vince. Fivestory is a standout luxury boutique on the Upper East Side housing five fashionable floors that focus on pieces from the finest local and international designers.

A must-shop is Ralph Lauren’s empire of American luxury. The brand currently holds court on a solid block of Madison Avenue real estate, where you’ll find flagship stores for the men’s, women’s and home collections—not to mention neighbouring stores for children and babies. If your shopping spree spawns too many bags to carry, Ralph Lauren offers a chauffeured vehicle that will take you (and your newly purchased fashions) back to Four Seasons Hotel New York.

New York City boasts some of the best performing arts venues in the world. Carnegie Hall has been a New York icon since it opened in 1891. Lincoln Center is home to the Metropolitan Opera, the New York Philharmonic, the New York City Ballet and Dizzy’s Club Coca-Cola—a sophisticated spot to enjoy cocktails and great late-night jazz. For those interested in venturing out of Manhattan, BAM (Brooklyn Academy of Music) is known as the home for adventurous artists.

The café and nightclub Provocateur is the pinnacle of New York City nightlife. International travellers and locals frequent this spot for its luxurious and intimate setting. Entry to both the café and the nightclub is guest list only. Another spot to toast with stars is at Top of the Standard on the High Line. This exclusive retreat radiates 1970s-style glamour, awash in glittering gold and boasting 360-degree views of Manhattan and the Hudson River. If you’re in the mood for music, head to the heart of Chelsea for a night at 1 Oak (the name stands for “one of a kind”), where DJs and surprise performers provide a soundtrack to the hip, stylish scene. 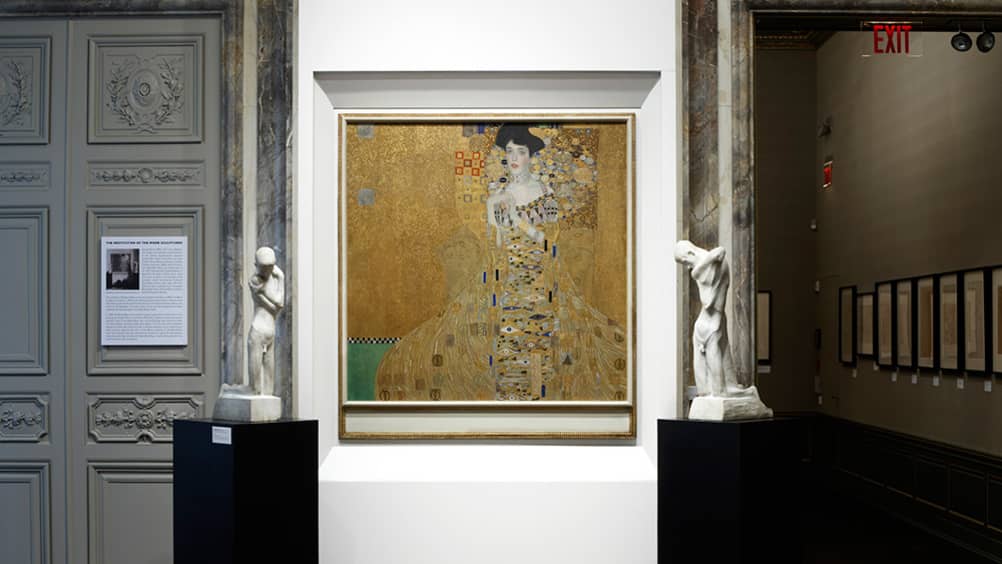 The compact but impressive Neue Galerie—housed in a 1914 mansion designed by the architects of the iconic New York Public Library—features an evocative collection of German and Austrian paintings, sculptures, décor and photographs dating from 1890 to 1940.

Countless cultural experiences can be found off the beaten path in New York City, especially at the numerous museums. Travel into the past at the Tenement Museum and hear the stories of immigrants living in 97 Orchard Street, a tenement built in 1863 on the city’s Lower East Side. Or explore early 20th-century German and Austrian art and design at Neue Galerie. Stop for an apple strudel at Café Sabarsky on the ground floor of the museum, where you’ll be surrounded by more period décor, including lighting fixtures by Joseph Hoffman, furniture by Adolf Loos and banquettes upholstered with a 1912 fabric by Otto Wagner.

Delve further into the interplay of culture and fine art at The Studio Museum in Harlem, a museum devoted to promoting the works of black artists. For a dose of modern art, visit New Museum on the Bowery, which showcases collections of contemporary artists from around the world. You can attend screenings of programmes and films from the impressive collection at The Paley Center for Media. Families travelling with children should visit the Intrepid Sea, Air and Space Museum, an interactive military history museum situated at Pier 86 on the Intrepid, one of the most successful aircraft carrier ships in U.S. history.

Escape to the spa

New York’s theatre scene is abuzz with a line-up of new shows. Winner of nine Tony Awards, including Best Musical, The Book of Mormon promises an evening of comedy at the Eugene O’Neill Theatre. Sing along to Beautiful: The Carol King Musical at the Stephen Sondheim Theatre or see the award-winning Kinky Boots at the Al Hirschfeld Theatre. Experience a classic with the Phantom of the Opera at the Majestic Theatre. Captivating audiences for over 25 years, it’s Broadway’s longest running musical.

A perfect day in New York

Start off with breakfast at The Garden before going on a helicopter tour of the city. Then spend some time shopping at Bergdorf Goodman or Barneys. After a walk through Central Park, have lunch at Marea or Caravaggio. In the afternoon, visit The Morgan Library & Museum or indulge in a spa treatment at the Hotel. Finish off the day with drinks and music at Ty Bar and be in awe of the spectacular 12-by-12-foot digital video wall depicting changing views of New York's famous skyline. 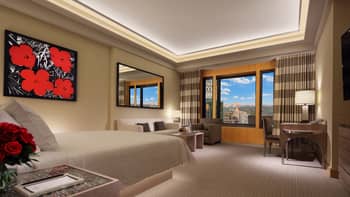 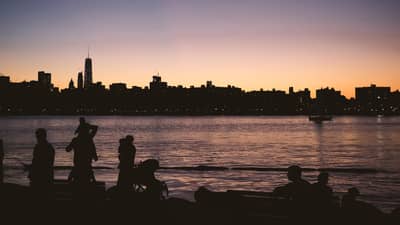 Heading to New York with kids? Here's our how-to guide for experiencing the best of the Big Apple with the whole family. 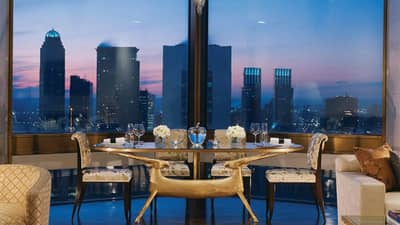 When Ty Warner purchased the building in 1999, I.M. Pei came out of retirement to collaborate with Peter Marino and complete the opulent penthouse that tops Four Seasons Hotel New York.