After 10 years together, the happy couple stand as newlyweds on the Reef Lawn overlooking the Red Sea.

The groom and his wedding guests dance during the reception.

The couple make a grand entrance for the zaffa with a festive fireworks display.

Farrah beams as she dances with her new husband.

A bouquet of calla lilies, the bride’s favourite flower

Egypt’s modern splendour and ancient wonders emanate a magical atmosphere—and Cairo-based couple Farrah el Tobgi and Ahmed Tantawy set out to capture this sentiment for their lavish wedding. “Since we have been dating for more than 10 years, we wanted something special—not the traditional Egyptian ballroom wedding in Cairo,” confesses Farrah. So for their outdoor soirée, the couple chose the lush and Arabesque roof–lined Four Seasons Resort Sharm El Sheikh, located on the banks of the Red Sea on Egypt’s Sinai Peninsula. “We wanted a wedding weekend to celebrate with all the beloved people who made our dream come true,” says the bride. “We chose the property because we think it’s the best in Egypt.”

The Scene: “The combination of the colour of the sea, the sand, and the greenery of the garden and palm trees made the venue unbelievably beautiful,” recalls the happy bride of the sprawling Reef Lawn. The Resort’s hilltop garden, with its magnificent views of the Red Sea and Tiran Island, was decorated sparingly with orchids and the bride’s favourite flowers—orange and yellow calla lilies. Wedding guests were treated to live music and a delectable buffet dinner that included stations for Indian, Asian and Italian cuisine. A three-layer ivory wedding cake, simple and elegant, was also decorated with calla lilies.

Magical Moments: Twinkling lights lit up the palm trees as the couple exchanged vows at the Resort’s Observatory Lounge on the day before the wedding reception. “The moment my father handed me over to my husband was the most memorable,” says the bride. “I have been dreaming of and waiting for that day since I was a young girl.” Following local custom, the new couple was paraded into the reception by way of an Egyptian zaffa, or wedding march. “It consists of a small band playing and singing an Egyptian song to welcome the bride and groom,” explains Farrah. “The zaffa is my favourite part of weddings!”

The Bride and Groom: It seems most fitting that Farrah and Ahmed would marry on the Egyptian coast, just more than a decade after meeting at the shore as young teens. “Ahmed and I first met at a summer compound on the north coast of Egypt, where we both spent summers with our parents,” reminisces the bride. “It was actually love at first sight. We used to spend our mornings on the beach, playing volleyball with our friends or hanging around by the pool.”

The Bride Wore: “As soon as I tried on the dress, I fell in love with it,” says Farrah of the cream Vera Wang gown she found at Browns Bride in London. “The asymmetrical layers of the dress made it so dramatic, yet feminine. It looked like a flower!” To complete her bridal look, she wore off-white satin shoes and a pair of cascading diamond earrings—a gift from her parents—made with a mix of yellow, white and rose gold.

The Honeymoon: The newlyweds travelled west for a three-week grand tour of the U.S., with a beach-side detour to the British Virgin Islands. “After our wedding, we spent one night at Four Seasons Hotel Cairo at Nile Plaza,” Farrah says. “Then we travelled to Miami, Orlando, Las Vegas and Los Angeles, to Beverly Wilshire, Beverly Hills (A Four Seasons Hotel), where we were welcomed with cake and Champagne from the team at Four Seasons Resort Sharm El Sheikh, Egypt.” 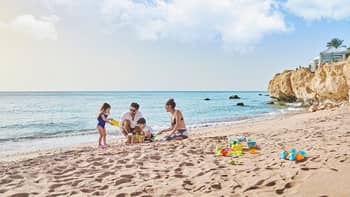 Escape to sunny skies and the world's warmest sea with 15% off our Bed and Breakfast rate. 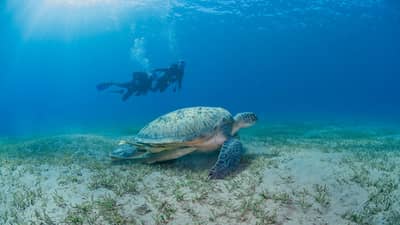 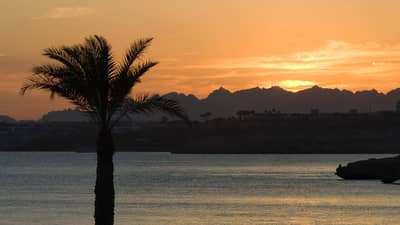 The Chef Concierge at Four Seasons Resort Sharm El Sheikh shares tips and recommendations to make your stay in Egypt a memorable one.