Evone and Vic pose in their fairy-tale wedding setting.

Branches, fairy lights and cotton details show the inspiration of the couple’s trip to a snowy Yosemite National Park.

The atrium of Four Seasons Hotel Guangzhou is a dramatic backdrop for the newlyweds.

Vic opens the door for his bride before his parents’ tea ceremony.

Evone’s bouquet of Dutch roses, astilbe and veronica was made by her bridesmaid Vane.

When Evone Chan and Vic Cheung began to plan their wedding, they knew they wanted to wed in their home city, Guangzhou. And Four Seasons Hotel Guangzhou, with its striking design and gorgeous views, proved to be the perfect venue. The couple drew inspiration from the Hotel’s vistas to create a captivating setting for a celebration that felt as if it were suspended in the sky.

The Traditions: Evone and Vic started their wedding day with traditional Chinese wedding customs. First, Vic set out to “fetch the bride” from her suite at the Hotel. Traditionally, the bridesmaids ask the groom and groomsmen to complete a series of tasks, such as finishing a tray of drinks in 10 seconds, before letting them into the room. After Vic was allowed to see his bride, who wore a beautiful red reformed qipao (a traditional formal dress in an updated or “reformed” style), Evone served tea to her parents. “It is a token of appreciation from the bride for the love and care her parents have given her,” she says. Then the couple and their families went to Vic’s parents’ house for another tea ceremony before returning to the Hotel for the wedding celebration.

The Scene: “Four Seasons Hotel Guangzhou inspired our wedding’s look and feel because it is one of the highest buildings in the city, and it made us feel like we were on a cloud,” explains the bride. But the wedding’s theme was also influenced by the couple’s memories of their trip to a snow-covered Yosemite National Park: “I just couldn’t forget our time there,” Evone remembers, “and we wanted to recreate that atmosphere so that all of our guests could feel the same way.” To carry out the over-the-clouds, fairyland theme, wedding planner Wing Poon used draped tulle, cotton batting and candles, with fairy lights and hanging garlands of cream-coloured blooms.

Magical Moment: As the couple shared their first kiss as husband and wife, “snow” began to fall from above. “It was the most magical moment of the night,” shares the bride. “It doesn’t snow in Guangzhou, but we made it happen in our wedding ceremony.”

The Couple: Evone and Vic first met at a friendly badminton game, where they paired up to compete against friends. “We won the game, and I started to feel that this gent was quite charming, because he cared about me when I fell or got hit,” Evone recalls. As they left, Vic invited Evone to go to a movie and dinner for their first date. After more than four years together, they decided to take the next step. “It was time for us to move to a further stage, to start a family,” Evone says.

The Bride Wore: Evone’s strapless gown was custom-designed with plenty of input from her husband-to-be. “He believed it would look perfect on me,” says the bride. She accessorized the chic dress—which featured a peplum detail at the waist and a mermaid-style skirt—with a pair of Salvatore Ferragamo shoes and a classic tulle veil. 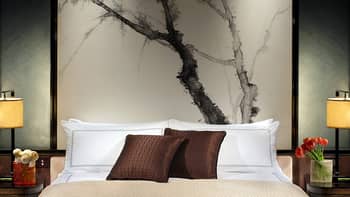 A pair of red Charles & Keith heels are the perfect accessory for the bride’s qipao.

Evone prepares for her big day.

The groom’s boutonnière is made of veronica and astilbe.

Evone dons a modern red qipao for the fetching of the bride and the tea ceremonies.

Vic gives his bride a kiss after he completes her bridesmaids’ tasks.

Evone poses with her bridesmaids.

The bridesmaids snap photos of Evone.

A task for the fetching of the bride

Evone and Vic steal a kiss.

Evone, Vic and her father leave the Hotel for Vic’s parents’ house.

The bride’s father helps her into the car.

Evone and Vic embrace on the helix staircase at Four Seasons Hotel Guangzhou.

White décor—including draped tulle, abundant cotton, hanging blooms and fairy lights—creates the feeling of a wedding above the clouds.

Evone and Vic exchange wedding rings as “snow” falls around them.

Garlands of white flowers and glass orbs hang from branches at the reception.

Vic, Evone and her father hold hands during the wedding ceremony.

An elegant welcome for guests

The bride embraces her father.

The bride and her father make their grand entrance to the ceremony.

A shower of “snow” is a magical accent to Evone and Vic’s first kiss. 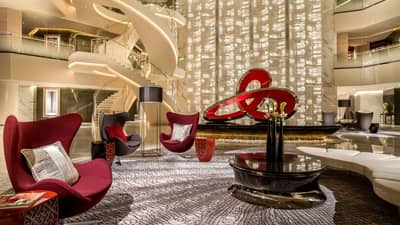 5 Things to Do in Guangzhou

From the Guangzhou Opera House to TaiKoo Hui market, step out and explore China’s third-largest city. 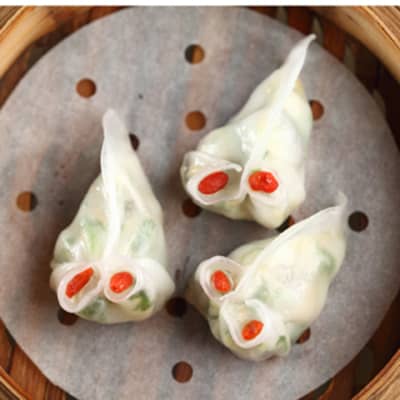