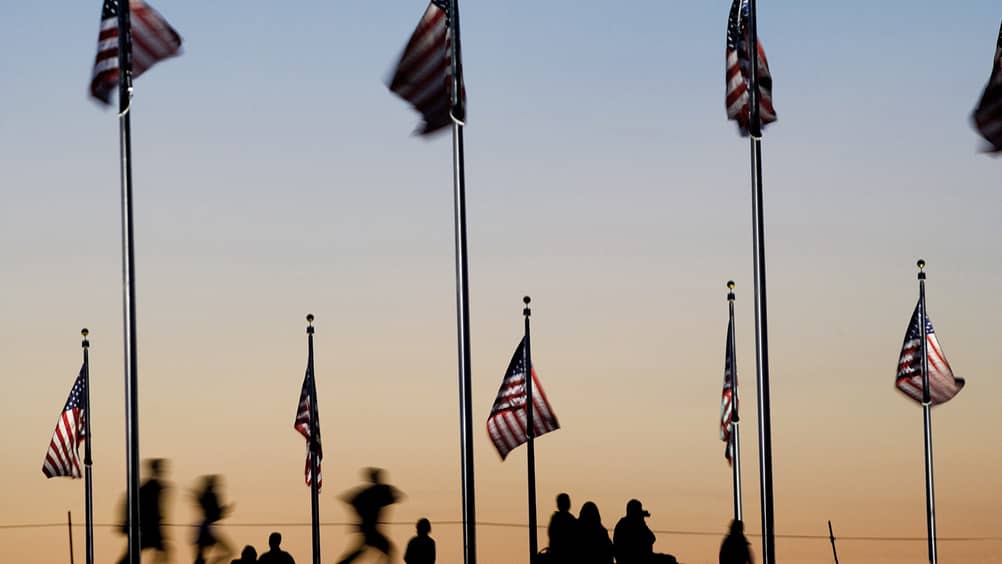 Washington, DC is full of museums, parks and monuments. There is no shortage of places – indoors and out – to enjoy with the whole family.

When deciding what to do in Washington, DC, your biggest challenge is likely to be that there’s too much to see. The city is tough to beat if you’re seeking a stimulating vacation with kids. There are museums and monuments to suit almost any interest, and, of course, must-see sites like the White House and the Capitol Building. Here are eight top picks for a family-friendly itinerary. 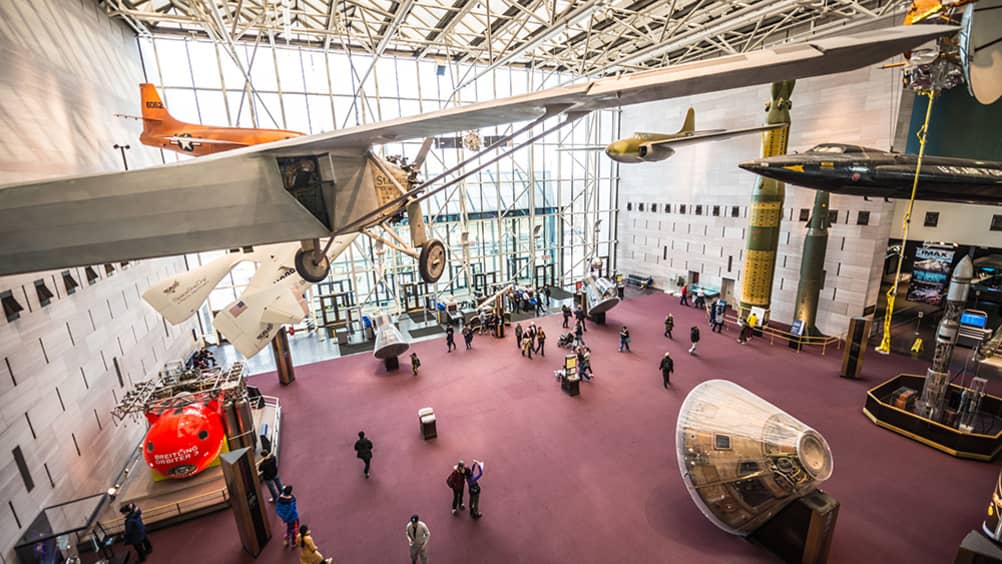 One third of the 60,000 objects, aircraft and spacecraft housed inside the National Air and Space Museum are one-of-a-kind pieces associated with major historic milestones.

You may remember visits you made as a child to the Smithsonian’s largest institution and the most visited museum in the United States. When you first walk in, the kids should look up and crane their necks to take in all of the planes and rockets on display. It’s just as much fun to find the 1903 Wright Flyer (the first airplane) as is it to examine the Apollo 11 command module, Columbia. Don’t forget to buy the famous astronaut ice cream at the gift shop for a sweet – and unique – treat. 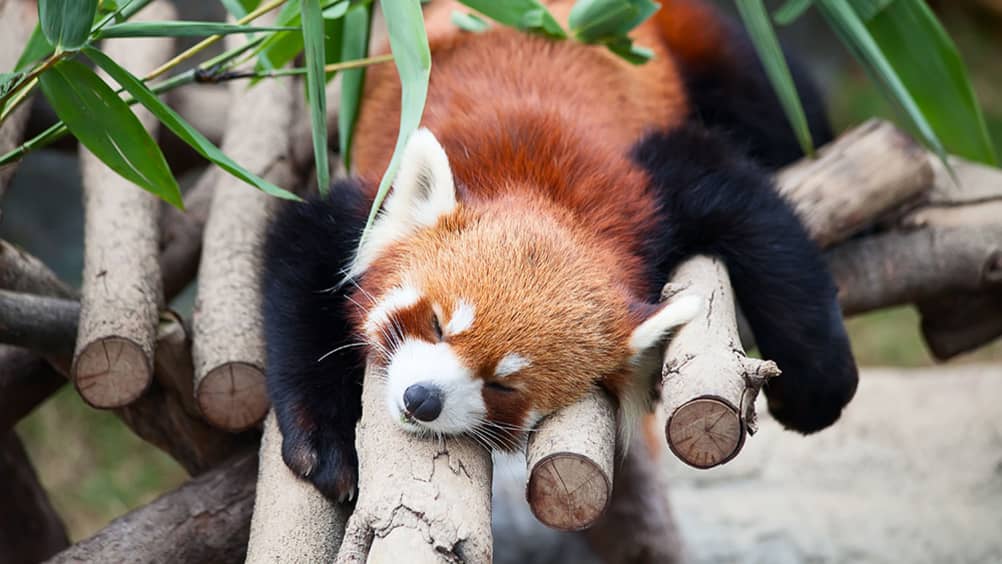 Be sure to visit the Red Pandas at the National Zoological Park. If you’re lucky, you and the kids may see some cubs frolicking in their indoor or outdoor areas.

Don’t want to waste a beautiful DC day inside? Head to the ultimate kid-pleaser: the Smithsonian National Zoo. You do not want to miss the David M. Rubenstein Family Giant Panda Habitat, where four giant pandas – Tian Tian, Mei Xiang, Bao Bao and Bei Bei – are more than worth the wait.

Watching orangutans travel between two buildings using the O Line, a series of 50-foot-high (15-metre) towers and cables, is a close second for top attraction. The six elephants also enjoy a nice habitat, making it one of the most popular exhibits.

While Newseum may be a newcomer compared to its neighbours – it opened in 2008 – the state-of-the-art, 250,000-square-foot space has earned its place on the can’t-miss list. Because of its serious exhibits, the museum is best for those of school age or older.

The Berlin Wall Gallery includes eight sections of the wall itself and a three-storey East German guard tower, as well as exhibits that explain how news and information undermined an oppressive society and helped topple the wall. The News Corporation News History Gallery includes almost 400 historic front pages. Don’t skip the interactive experiences at the HP New Media Gallery.

Before leaving, take a few minutes to step out onto the Hank Greenspun Terrace for panoramic views of Pennsylvania Avenue. There’s so much to see that it’s easy to spend the entire day at the museum – or even two. It’s a good thing tickets remain valid the day following the first visit.

Do those thick, 75-foot-high (23-metre) Corinthian columns inside the museum’s Great Hall look familiar? Architect Montgomery C. Meigs was inspired by Roman palaces in his Pension Building – now home to the National Building Museum – in the late 1800s.

Kids may get the urge to run around the Great Hall’s airy interior, which measures 116 by 316 feet (35 by 96 metres). Instead, channel their energy into the museum’s “Play, Build, Work” exhibit, which encourages both parents and children to create their own structures with foam blocks.

With its fossils, skeletons and taxidermy animals, it would be all too easy for the Natural History museum to feel dated – but it doesn’t, thanks to exhibits like the live Butterfly Pavilion, “The Last American Dinosaurs” and “Beyond Bollywood.” No trip to the museum is complete without paying homage to the Hope Diamond, a legendary 45-carat blue diamond donated by Harry Winston in 1958.

Just a stone’s throw from Four Seasons Hotel Washington, DC, the Old Stone House in Georgetown is the city’s oldest standing building. Children and adults alike will enjoy exploring this well-preserved Revolutionary War-era home that dates back to 1765. Its three storeys, which are fully outfitted with Colonial furnishings, include a rustic kitchen with a fireplace, a dining room, a dumb waiter and bedrooms. Venture inside the house Wednesdays through Sundays between noon and 5:00 pm, and enjoy the English garden every day during daylight hours.

The Carousel on the National Mall

Reward kids for good behaviour at the Smithsonian museums with a three-minute ride on this old-timey carousel stationed on the National Mall. Built by the Alan Herschell Co. in the 1940s, the carousel lived in an amusement park in Woodlawn, Maryland, before its arrival to the U.S. capital in the late 1960s.

Although DC is a relatively small city, short legs can easily get tired just walking the length of the Mall. This hybrid bus-boat mostly follows a land route – passing by the White House; the Lincoln, Jefferson and Vietnam Veteran memorials; and many other highlights – but also takes a substantial paddle in the Potomac. The 90-minute tour offers a terrific overview of the city, particularly for those who haven’t visited before. 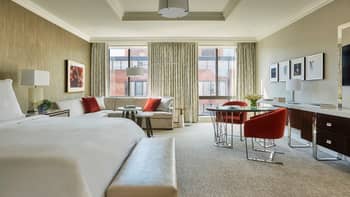 Experience More – Up to USD 200 Credit

Receive a Hotel credit towards incidental charges, including spa treatments and dining. 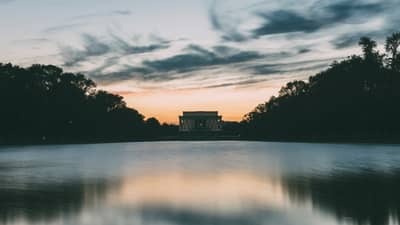