Gautam sits astride a white horse for his baraat, the arrival of the groom.

A fire is one element of the saat phere, an important part of a traditional Hindu ceremony.

The newlyweds embrace in front of the Sydney Opera House.

Henna is applied to the bride and female relatives during the mehndi ceremony.

Mitasa arrives in a palkhi.

Mitasa Tewari and Gautam Kshatriya scoured Sydney for the perfect venue for their wedding, but it wasn’t until they visited Four Seasons Hotel Sydney that everything seemed to fall into place. “I loved the grandeur and elegance of the whole venue and felt it suited perfectly for our Indian wedding,” says Gautam.

The Bride and Groom: Gautam and Mitasa were introduced by mutual friends. After a successful lunch date, the couple met again for dinner the same night, and remained inseparable for the next five years. “I always wanted the day that I proposed to be a significant one, so I decided to do it on our five-year anniversary,” Gautam says of the day-long surprise, which included a private sailing trip in Sydney Harbour. It wasn’t until after he and Mitasa reached a secluded beach that Gautam proposed, while the skipper of the boat secretly caught the special moment on video. “The proposal completely swept me off my feet,” says Mitasa.

The Traditions: “A traditional Hindu wedding is a lengthy affair,” says Gautam. The festivities kicked off with a festive Sangeet party, a colourful and informal event for 300 guests with “lots of Bollywood dancing,” he says. The following night was the mehndi ceremony, during which henna was applied to the bride and female relatives from both families. On the day before the wedding, both Mitasa and Gautam participated in a haldi ceremony, where friends and family rubbed turmeric on the couple’s arms to help the skin glow.

The Scene: Four Seasons Hotel Sydney proved to be a great setting for Gautam to arrive by horse for the wedding ceremony. “The idea of coming on a horse in the middle of George Street, literally stopping traffic and getting tourists and bystanders joining in on the baraat [the arrival of the groom], was an added incentive,” he says. “It was truly phenomenal.” Inside, the ballroom was transformed into a hall fit for royalty: A grand mandap (pavilion), decorated with red Bulgarian roses and lights, dominated the room. The colour palette was that of a traditional Hindu wedding, with deep reds and golds softened by the gentle light of hundreds of candles. Mitasa made a spectacular entrance in a palkhi (palanquin), once the transportation of choice for Indian royalty, and the couple exchanged garlands for the jaimala ceremony before the remaining religious rituals.

The Reception: To continue the wedding festivities, the couple hosted a Western-style reception a week later at the nearby Sergeants Mess in Chowder Bay. In a room overlooking the water, hundreds of fresh red Bulgarian roses stood out against a backdrop of ivory linens, while crystal chandeliers, candles and sleek seating completed the modern aesthetic.

The Bride Wore: For the traditional Hindu wedding, Mitasa chose a red, green and gold brocade Indian lengha that was complemented by kundan jewellery, made with precisely cut gemstones set in gold. For the reception, Mitasa wore an equally stunning red and cream sari. 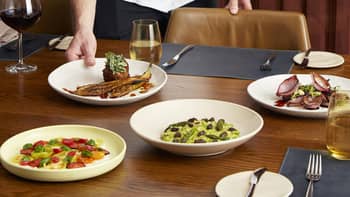 Celebrate the culinary flavours of Australia with a daily AUD 100 Hotel credit for Mode Kitchen & Bar and enjoy the ease of valet parking.

In the kanyadaan, the bride’s father entrusts his daughter to the groom.

The bride’s family awaits the arrival of the baraat.

The mandap is decorated as one fit for a king.

A faux red and gold crown adds to the royal aesthetic.

The bride’s feet are washed as part of the kanyadaan ceremony.

Burning candles set the tone for the ceremony.

The bride and groom exchange garlands during the jaimala ceremony.

The couple embrace before their wedding reception.

The bride’s 1.5-carat round brilliant diamond and platinum engagement ring was custom designed.

The couple introduce a less formal and more modern aesthetic for the reception.

A customized USB wristband serves as a wedding favour.

A chocolate mud and red velvet layer cake is hand-painted with “Radha & Krishna,” names of the divine couple who symbolize love.

Before their wedding reception, Gautam and Mitasa strike a pose.

Roses hang from the mandap at the ceremony.

The newlyweds are photographed in the foyer of
Four Seasons Hotel Sydney.

The couple’s close friends arrange a flash mob after the first dance.

The newlyweds are photographed in front of the Sydney Opera House.

The couple enjoy an intimate moment.