On the North Bank of the Neva River, the famed cathedral within the Peter and Paul Fortress is the burial site of many tsars and tsarinas.

The historic centre of St Petersburg, founded by Peter the Great in the early 1700s, is divided roughly in half by the wide Neva River. The south bank is home to iconic landmarks, upscale shopping and residential areas. On the north bank stands the Peter and Paul Fortress, which includes the Peter and Paul Cathedral, the final resting place of many tsars and tsarinas. A walk along the Neva River offers some of the best views of the skyline of this incredible metropolis.

On the stylish south bank, Four Seasons Hotel Lion Palace St Petersburg is the perfect starting point for your discovery of the city. Enjoy an urban hike in the beautiful and historic Admiralteysky district. Take in the astounding collection of the State Hermitage Museum, tour colourful Baroque palaces and churches with extravagant domes, and walk or cruise along romantic canals. Many of St Petersburg’s can’t-miss sights are just a short stroll away. 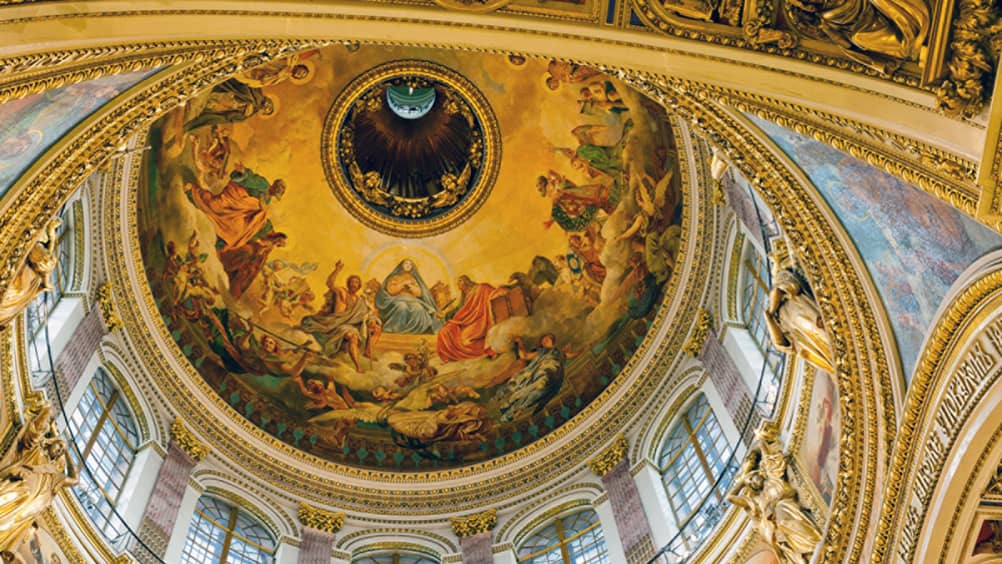 On the North Bank of the Neva River, the famed cathedral within the Peter and Paul Fortress is the burial site of many tsars and tsarinas.

Its golden dome shining in the sun, St Petersburg’s largest cathedral is located on St Isaac’s Square, right beside the Hotel. The observatory offers striking views and is the best way to get a sense of the city’s grandeur. The elaborately adorned cathedral, which houses a museum, was a project of decades for French architect Auguste de Montferrand, who also designed the Lion Palace.

In front of the cathedral, pause for a moment to admire the bronze equestrian statue of Nicholas I in St Isaac’s Square. Jump back to the present with a visit to the nearby Rolls-Royce showroom, and then enjoy cappuccino with a view at the trendy and whimsical café Schastye, whose name means “happiness.” Happiness to go? A box of sweet treats makes a great gift, if you can bear to part with it.

Wander down the city’s main thoroughfare, which stretches 4.5 kilometres (2.8 miles) through the lively Gostiny Dvor shopping district. The neighbourhood’s Neoclassical, Baroque and Art Nouveau architecture is delightful, as are its historic department stores, such as Gostiny Dvor (at 35 Nevsky Prospect, one of the world’s oldest indoor shopping centres) and Passazh (48 Nevsky Prospect). This grand boulevard has it all: international designer labels, Russian caviar, lacquer boxes, amber, Gzhel porcelain and delicate hand-knit Orenburg shawls. Beluga Deluxe (off Nevsky Prospect at 5 Iskusstv Ploshchad) is the most exclusive souvenir boutique in town.

Café Singer, on the second floor of Dom Knigi bookstore (28 Nevsky Prospect), is a Russian classic for lunch. Try blini (thin pancakes) with smoked salmon and sour cream, or borscht (delicious beetroot soup), while enjoying the amazing view of the Kazan Cathedral through the huge arched windows.

The coffee shop on the ground floor of Yeliseyevsky Food Hall (56 Nevsky Prospect) is the spot to indulge. Sip afternoon tea paired with homemade éclairs, or an aperitif with your favourite cheese, charcuterie or black caviar. The Art Nouveau setting of this epicure’s paradise offers good reason to linger.

Two blocks from the Hotel you will find the impressive green and white façade of the Winter Palace. This former home of Russian tsars and tsarinas now houses the Hermitage museum. Before you plunge into it, though, take time to explore the enormous Palace Square, the Neoclassical, bow-shaped General Staff Building, and the Alexander Column, facing the Winter Palace.

The museum’s world-famous collection includes Siberian antiques, artefacts from ancient Egypt, palace interiors, and European art from the 19th and 20th centuries. Be sure to see the masterpieces by Leonardo da Vinci, Rembrandt van Rijn, Henri Matisse and Paul Gauguin.

Ascend the magnificent white and golden Jordan Staircase by Italian architect Francesco Bartolomeo Rastrelli in private by booking a personalized tour of the museum (about one month in advance) with your Concierge. 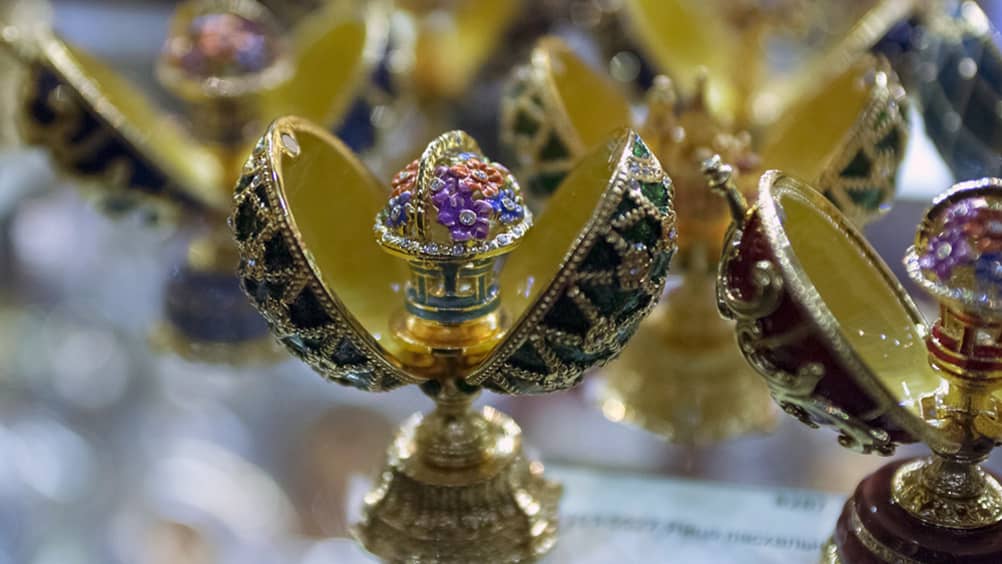 The series of Imperial Easter eggs made by Peter Carl Fabergé is considered to be the jeweller’s most celebrated and intricate work.

St Petersburg’s Fabergé Museum, housed in the splendid Shuvalov Palace, opened to the public in March 2014. Admission is restricted, so ask your Concierge to book tickets for a guided tour—a week in advance is recommended. The House of Fabergé, founded in 1842 in St Petersburg, manufactured unique pieces by order of the Russian royal family, European monarchs and Eastern rulers, as well as jewellery, photograph frames and timepieces available for purchase in their shops.

The “jeweller to the tsars” created 50 Imperial Easter eggs, one per year. The Blue Room of the museum showcases nine unique Fabergé Imperial Easter eggs, including the Hen Egg of 1885, which is the very first Easter egg commissioned by Tsar Alexander III for his wife; the Coronation Egg; and the Order of St George Egg, one of the last in the series.

Walk along the Kryukov Canal to attend a service (daily at 10:00 am) at the Orthodox 18th-century St Nicholas Naval Cathedral, located in a quiet residential area in the western part of Central St Petersburg. Along the way you can marvel at the eclectic architecture of the area’s apartments, palaces and romantic bridges.

The light blue and white Baroque cathedral, with its five golden domes and spires and beautiful bell tower, is breathtaking. Inside the church, glittering chandeliers, precious 18th-century icons, candles, incense and a magnificent choir add to the magic. 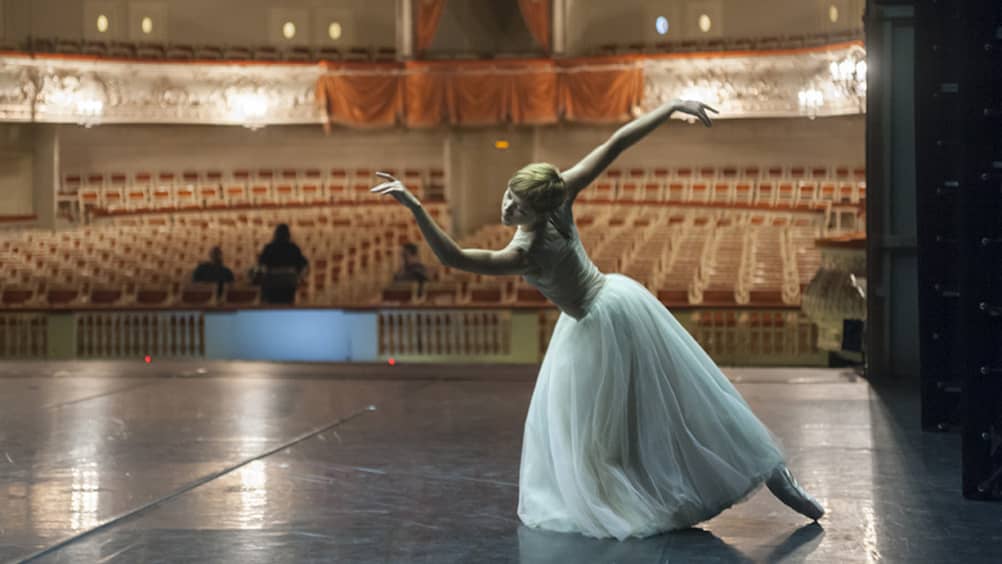 The renowned Mariinsky Theatre has been entertaining audiences with ballet, opera and theatrical performances since 1783.

Delight in an afternoon tour through the hall, lobby, Tsar’s Box and dressing rooms, as well as a peek at rehearsals, at the majestic Mariinsky Theatre. Ask your Concierge to book this exclusive experience—two weeks in advance is recommended. For a special treat, your Concierge can also arrange for you to enjoy a world-class ballet or opera performance in the evening from a seat in the luxurious Tsar’s Box.

After the show, savour a late-night dinner at Mansarda restaurant, or sit down for drinks and people-watching on the open-air roof terrace, the best way to toast a marvellous day in St Petersburg. The restaurant is located on the sixth floor of the Quattro Corti business centre, close to the Hotel. With its stylish interior, international cuisine and spectacular views of St Isaac’s Cathedral, this is a fine spot to reflect on the best of the past and present of this beautiful city. 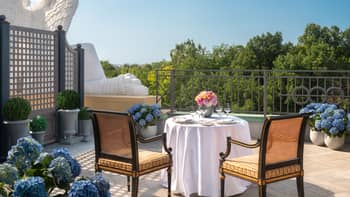 My Weekend to Remember

Collect unforgettable memories with 15% off our Room Rate and more perks designed to help you experience the best of the city. 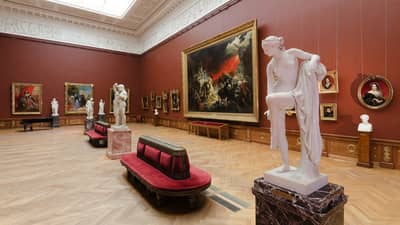 The city is in the midst of a cultural renaissance, and Artspace Editor Andrew M. Goldstein leads you to the highlights. 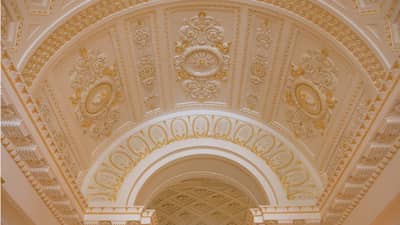