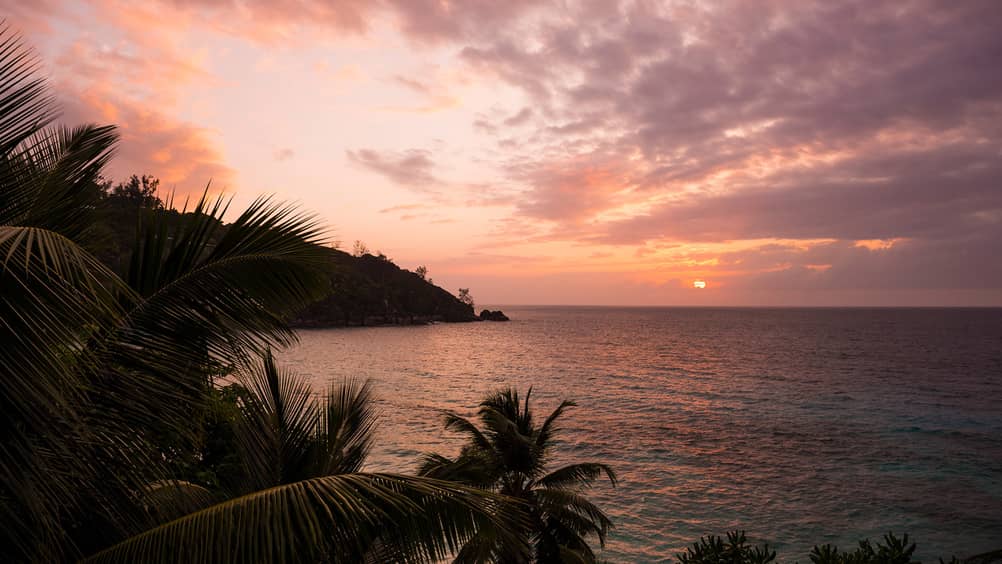 Each of the 115 islands of the Seychelles has its own flair and a mystical draw. Located just off the coast of East Africa in the Indian Ocean, the Seychelles were largely uninhabited until the late 18th century, when French traders and sailors arrived along its shores. Today, the Seychelles offer a diverse blend of cultures—French, British, African, Indian, Chinese and Arab—as well as some of the best beaches in the world.

Take advantage of the Seychelles’ prime beaches at Four Seasons Resort Seychelles, where Petite Anse Bay’s clear azure waters beckon. Also on Mahé, Anse Royale offers secluded coves and prime snorkelling spots. Anse Lazio, on Praslin Island, is known for its crescent shape and soft white sands, and La Digue’s Anse Source d’Argent, with its massive boulders, is considered to be the most photographed beach in the world.

With six marine national parks among its picturesque islands, the Seychelles are a year-round paradise for scuba divers and snorkellers alike. Swim among hawksbill turtles or snorkel through a kaleidoscope of colourful corals and tropical fish. At the popular Shark Bank diving spot, dive among stingrays and puffer fish.

Of the more than 100 islands in the Seychelles, there’s bound to be one that’s perfect for you. The island of Mahé, the commercial heart of the archipelago, is home to the capital city of Victoria as well as lush forests, mountainous peaks and more than 60 beaches. Explore the spectacular granite rock formations and stunning natural flora and fauna, including some of the world’s rarest birds, on La Digue, where bicycles and ox carts are the preferred modes of transport.

Praslin is home to the Lemuria Championship Golf Course, the only 18-hole championship golf course in the Seychelles. Venture farther by chartering a yacht, catamaran or clipper: Spend a few days sailing around the Outer Islands to explore coral atolls and sand cays. 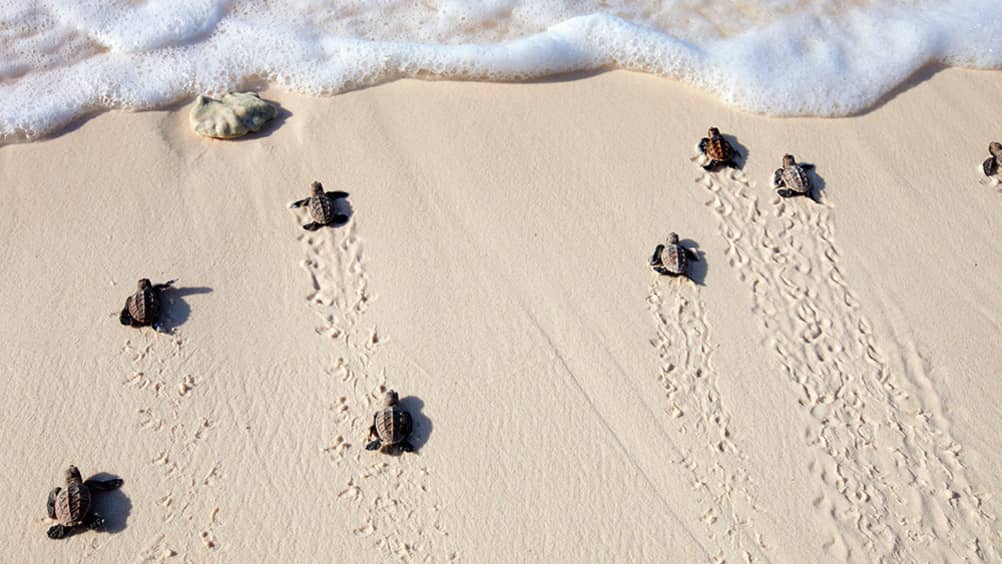 The Seychelles is home to thousands of land and marine species, including the endangered hawksbill turtle.

Known for their rich marine life and nature reserves, the Seychelles are home to more than 2,000 species of plants, more than 1,000 species of fish and the largest population of Aldabra giant tortoises in the world. On Praslin Island, you’ll find the UNESCO World Heritage site of Vallée de Mai Nature Reserve and the coco de mer palm tree, known for its distinctive fruit. The 2-hectare (5-acre) Mount Fleuri National Botanical Gardens, established in 1901, are also worth visiting, with highlights including the coco de mer, giant tortoises and an orchid house. Hikers can explore the Seychelles’ highest peak in Morne Seychellois National Park.

Held annually in Victoria, the vibrant Carnaval International de Victoria brings together performers from around the globe for three days of cultural dances, processions and parades. In October, celebrate the flavours, sounds and smells of the Creole world at Festival Kreol, the largest and most important event in the Seychelles. 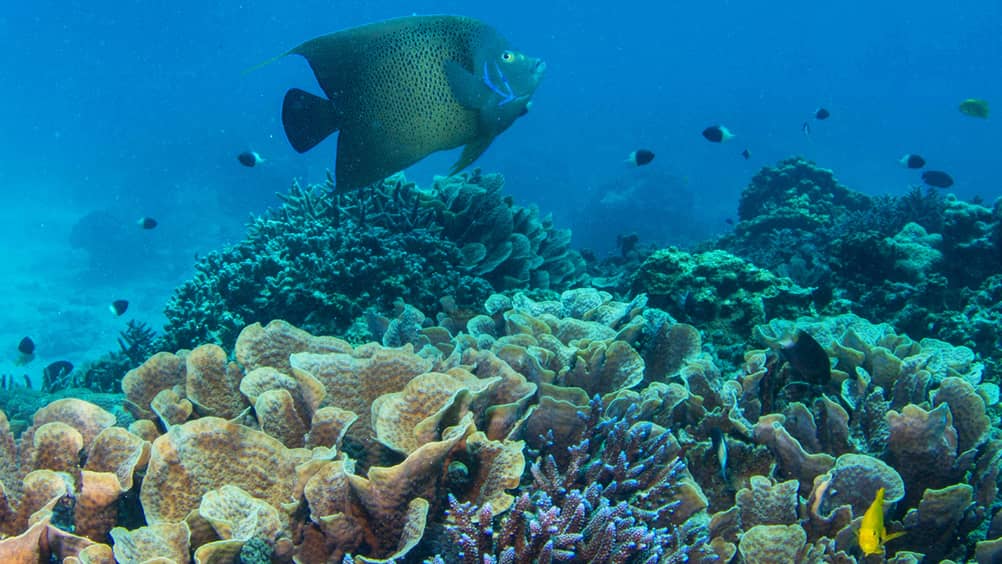 Snorkel at any of the six national marine parks.

With six marine national parks among its picturesque islands, the Seychelles are a year-round paradise for scuba divers and snorkellers alike. Swim among hawksbill turtles or snorkel through a kaleidoscope of colourful corals and tropical fish. At the popular Shark Bank diving spot, dive among stingrays and puffer fish.

Located off Mahé’s northeastern coast and just 35 minutes from the Resort, Eden Island is an exclusive development and luxury marina. Shop for souvenirs after a leisurely seafood lunch, sip cocktails while watching yachts sail through the harbour or experience a taste of island nightlife on a bustling Friday evening.

Seychellois cuisine deliciously blends African, Chinese, English, French and Indian flavours with rich Creole influences. Sample classic dishes like spicy grilled octopus in a sauce of chilli, ginger and garlic; fish baked in banana leaves; and thick seafood curries. Finish with dessert made from tropical fruits such as jackfruit or bananas. You can also try your hand at a Creole cooking class at the Resort.

A drive along the Sans Souci mountain pass will bring you to Mission Lodge, a panoramic viewpoint where Queen Elizabeth II once took tea. Farther along the road is Tea Factory, a plantation along the slopes of Morne Blanc. A guided tour reveals the tea production process, which has been going on here since 1966; sample organic brews; and purchase your choice of tea infusions from the thatched tavern.

Within 15 minutes of the Resort, you can visit the studios of local artists such as Michael Adams, Gerard Devoud, Tom Bowers and Andrew Gee. The Kenwyn House, in Victoria, showcases an impressive collection of local artwork, as well as locally crafted fine jewellery, all available for purchase.

Parasailing, waterskiing and kayaking are some of the best ways to explore the Seychelles.

The Seychelles are just as beautiful above water as beneath the surface. Make the most of the views with your choice of water sports, such as parasailing, waterskiing, kayaking and exploring Beau Vallon Bay by jet ski. 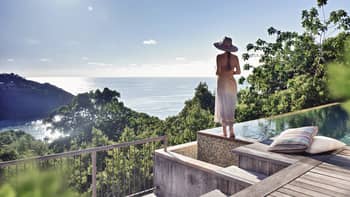 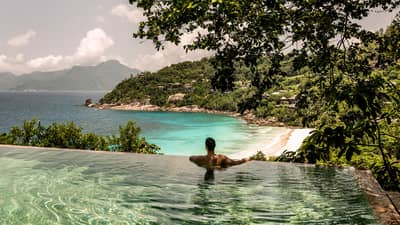 Seychelles is known for its lively island culture and outdoor activities. The Concierge at Four Seasons Resort Seychelles shares tips to make the most of your visit to this secluded and romantic archipelago. 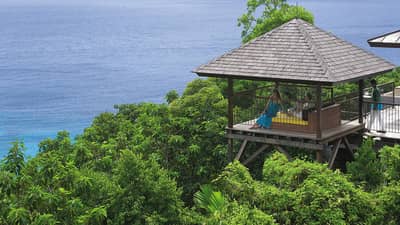 To Build a Better Treehouse