The bride and groom are captured near a pair of charming, weathered boats.

Landmarks near the Resort, including an old sugar mill, provide picturesque backdrops for photos.

A colourful starfish is the perfect placeholder for the couple’s wedding rings. Sarah’s has white and blue diamonds set in a white gold band.

In lieu of traditional seating cards, guests’ nicknames are written on sand dollars.

Sarah and Nathan smile at each other.

Finding the perfect wedding location is a lot like falling in love: For some, it’s a long, careful process, others know instantly. When Sarah O’Connor and Nathan Cordery arrived at Four Seasons Resort Nevis, it was love at first sight. The two were visiting for a baptism, and after a few Killer Bee rum punches and dinner at Mango, the Resort’s waterfront restaurant, the decision was confirmed: This was where they would wed. “Four Seasons Nevis was perfect,” says Sarah. “We loved the feel of Mango and its open-air dining with the ocean practically lapping at our feet.” Once home, the pair tweeted at the Resort about their intentions to marry there, and wedding plans were soon set in motion.

The Scene: The formal yet relaxed celebration echoed both Nevis’ remote location and the Resort’s elegance. “We wanted the style of our wedding to reflect the location,” says Sarah. “The inspiration was a modern-day Jay Gatsby entertaining pirates—a nautical black tie.” Shades of blue mimicked the tones of the Caribbean Sea, and nautical details—such as a British naval map of Nevis, which served as the guest book—were woven throughout as a nod to Sarah’s love of sailing. Simple clusters of blue and white hydrangeas decorated reception tables to complement rather than compete with the staggering scenery, but the most remarkable design detail came in the tables themselves: Each featured a handcrafted shadow box filled with sand, shells, coral and twinkling lights. “It looked like the beach and ocean were right under our plates,” says Sarah.

Magical Moment: “Even though we spent months planning the scene, walking into Mango with the sun starting to set and seeing the tables with the flowers and candles was breathtaking,” says Sarah. “Dinner on the ocean with the sun setting in the background was something we couldn’t have experienced anywhere else.”

The Bride and Groom: It all started with a tweet. Sarah and Nathan, virtual strangers who had mutual Twitter followers, engaged in a heated discussion about using a valet to park your car at the gym. Sarah was a fan. Nate was not. From there, Sarah and Nate continued to debate a range of topics, and months of tweeting led to texting, which naturally resulted in a real, face-to-face date. “After just five months, we were both confident we wanted to share chicken wings and Nevisian sunsets with each other for the rest of our lives,” says Sarah. “The chemistry was there from the beginning.”

The Bride Wore: Sarah paired her classic satin mermaid gown by Justin Alexander with a lace cape by Pronovias, which added a bit of Old Hollywood–inspired flair to her ensemble. Opting for a retro topknot, Sarah capped off the look with a saucer-shaped fascinator designed by Blair Nadeau.

A Personal Touch: Since it was too difficult for Sarah’s 98-year-old grandfather to attend the wedding, he surprised the couple with a video message that was played at the reception. “Sending us his love was so special, since it was too far for him to travel,” says Sarah. As a way to give back to the Island of Nevis, the bride and groom adopted two sea turtles, Caribelle and Banjo. Certificates of adoption were placed in each guest’s welcome bag, along with Killer Bee rum punch, which was bottled by the owner of Sunshine’s Beach Bar & Grill, a nearby bar where Sarah and Nathan hosted their welcome party. 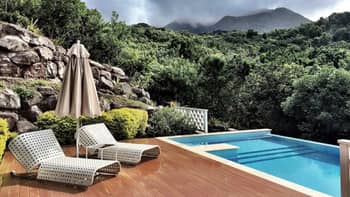 Sporting a topknot and chandelier earrings, Sarah does a final check of her mermaid gown before her grand debut.

The bride’s lace Pronovias cape adds a dramatic touch to her form-fitting dress.

Nathan looks dapper in a single-breasted black tuxedo paired with a silver bow tie and suspenders.

A glamorous red Louboutin sole peeks out from beneath Sarah’s gown.

The bridal party shares a laugh.

Sarah carries a bouquet of white plumeria with white and yellow cymbidium orchids.

Nathan and his groomsmen

Sarah and Nathan wed at nearby St Theresa Catholic Church.

The groom smiles during the ceremony.

The bride and groom are the picture of happiness.

The newlyweds pose against staggering mountain vistas of Nevis.

The happy couple with Nate’s father, Glenn, and Father Ernie.

Nathan and Sarah hold hands during the toast.

Instead of a traditional Champagne toast, the couple takes a shot of vodka in honor of the bride’s Polish heritage.

A British naval map of Nevis serves as the guestbook.

Embraced by her husband, Sarah emanates joy as a new wife.

Helen, the mother of the bride, dances with Sunshine, of Sunshine’s Beach Bar and Grill.

Rums from different islands are served at the thatched rum hut.

Mountains and the palm tree–lined drive to the Resort set the idyllic stage for a wedding portrait.

Sarah and Nathan get cutesy at the reception. 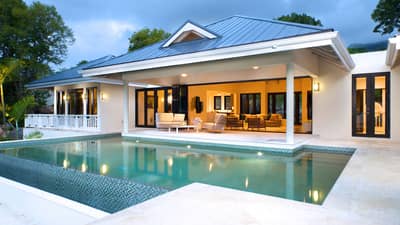 #LiveLarge – Experience One Of Our Villas 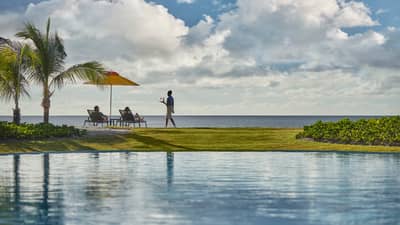 The Guest Experiences Team at Four Seasons Resort Nevis shares travel tips and other suggestions to make your family vacation a memorable one.