Alexandre’s pet name for his bride is “Pingu,” so he had the television show’s eponymous penguin etched on her dancing shoes.

The newlyweds pose for a photo at the Hotel.

In keeping with the Great Gatsby theme, the couple pose for pictures in a vintage car.

After the ceremony, Alexandre and Sandra celebrate as they return up the aisle as husband and wife.

Alexandre’s friends embrace him at the reception.

It wasn’t hard for Alexandre and Sandra to decide on Four Seasons Hotel Ritz Lisbon for their wedding venue. The couple had been to 18 weddings over the last three years, and not one had taken place in Portugal’s capital city. “Almost all of those weddings took place at the same venue,” says Sandra. “In Portugal, it is very common to have weddings at venues outside the city centre. In our case, we always imagined our wedding in Lisbon.” With that in mind, the couple began touring various hotel options. “Four Seasons Hotel Ritz Lisbon was an obvious choice,” says Sandra. “After the visit our feeling was unanimous: This is the spot!”

The Scene: Knowing they had always wanted an outdoor wedding, Alexandre and Sandra chose the Hotel’s garden for the site of their nuptials. At sunset, the bride walked down the aisle, escorted by her father, to Florence + The Machine’s “You’ve Got The Love.” As nearly 200 guests looked on, the couple exchanged vows in a magical ceremony set off by the beautiful garden scenery. The 1920s-themed reception that followed was inspired by the Hotel’s ballroom. “We wanted to have a different theme, and after the first visit to the Hotel, it was clear to us that the place was perfect for a Gatsby-style party,” says Sandra. “The main room and the décor fit perfectly within this theme.” White- and gold-detailed place settings and gold Chiavari chairs contrasted with black table linens. White rose centrepieces were complemented by white ostrich feathers, an homage to the Roaring ’20s theme. Small crystals draped over the tables created a dramatic and elegant effect.

The Bride Wore: Inspired by the Gatsby theme, Sandra chose a beaded Jenny Packham gown reminiscent of the flapper-style dresses worn during the 1920s. The bride accented her ceremony gown with Lola Cruz heels, long layering necklaces (also by Jenny Packham) and a wavy up-do, the latter two especially befitting the ’20s aesthetic.

Personal Touch: Wanting their first dance to be anything but average, the couple chose “The Time of My Life” from Dirty Dancing as their song. “We learned the exact choreography from the movie,” says Sandra, who recreated the famous scene with her husband during their first dance as Mr and Mrs.

Photography I Do Photojournalism 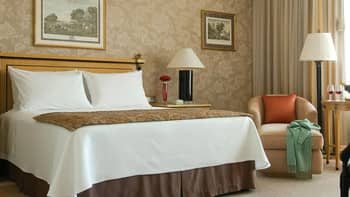 Sandra stands outside Four Seasons Hotel Ritz Lisbon during a moment of calm before the wedding festivities kick off.

To pay homage to the groom’s pet name for his bride, the couple surprised guests with penguins at the wedding.

The groom dances during the reception.

Bridesmaids relax before the ceremony.

The mother of the bride drapes various layering necklaces on Sandra.

A close-up portrait of the bride reveals her stunning makeup.

Alexandre and Sandra are wed during a garden ceremony at Four Seasons Hotel Ritz Lisbon.

The newlyweds toast during their cocktail reception.

The bride carries a bouquet of red roses, peonies and white marigolds.

A black and gold colour palette is borne out by the ceremony décor.

Seat markers for the bride and groom reflect Alexandre’s special nickname for Sandra.

Alexandre and Sandra relax before the reception.

The couple enjoy a moment of privacy before they enter the reception.

The bride and groom make their entrance into the reception.

Dancing with her husband, the bride shows off her reception dress, a stunning special-edition gown by Veste Couture.

The Hotel’s ballroom is the inspiration for the Great Gatsby–themed wedding.

The groom and his friends mug with a gold frame prop.

Alexandre and Sandra toast to their marriage.

Wedding guests dance to music spun by a DJ or performed by a live band. 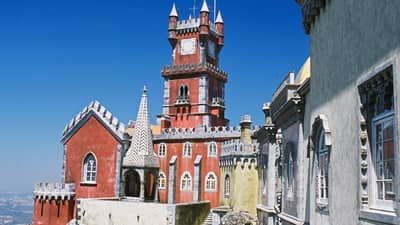 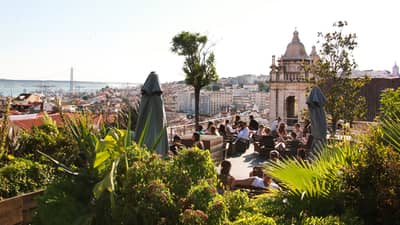