The couple share a kiss at the entrance to the Resort.

The ceremony and reception is held at the Fountain Terrace.

The bride is all smiles as she walks down the aisle.

Balls made of green mums are strung from branches.

The couple say “I do” under a black and white chuppah.

Green Spider Mums are placed on each dinner napkin.

Las Vegas residents Elizabeth Share and Andy Levey didn’t want their wedding to reflect their town’s glitzy stereotype. They first thought an at-home ceremony would be perfect for their intimate affair, but then decided that with all the logistics involved, a hotel wedding venue would make planning easier. They chose Four Seasons Hotel Las Vegas for its quiet, refined and sophisticated ambience. “The Fountain Terrace became a little oasis,” says the bride.

The Scene: The outdoor Fountain Terrace, with its picturesque waterfall and lush landscaping, provided a private paradise for the wedding.

The Bride Wore: For the ceremony, Elizabeth chose a nude-coloured strapless Monique Lhuillier wedding gown with a lace overlay. Before the reception, she added a black sash. “It was a romantic gown, and the black sash added a modern twist,” she explains.

The Bride and Groom: Andy proposed with a costume ring so Elizabeth would be surprised when he popped the question. After his proposal, the couple went shopping together for her engagement ring. She gave the costume ring to her florist to incorporate into her bridal bouquet.

A Personal Touch: The couple included a number of ceremonial items from Andy’s Bar Mitzvah in their ceremony, such as the tallith and the kiddush cup. The officiant who performed the Jewish wedding ceremony was the Leveys’ family rabbi. 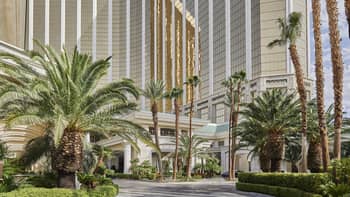 Receive a complimentary third night when you book a non-refundable stay in a suite.

The bride and groom pose for a romantic photograph.

The bride and groom dance the night away.

The black and white linens inspire the wedding’s details.

The bride glows at the beginning of the processional.

The happy couple during the ceremony recessional.

The newlyweds dine underneath the ceremony canopy. 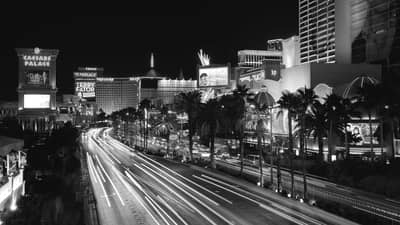 A Chef Concierge at Four Seasons Hotel Las Vegas shares tips to make your stay in Las Vegas a memorable one, from where to create your own perfume to all best shopping spots. 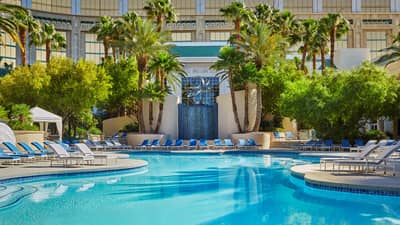 7 Things to Do in Las Vegas With Kids

Head outdoors, catch a show and hit the pool with these family-friendly suggestions from Four Seasons Hotel Las Vegas.