Does your hotel offer wheelchair-accessible rooms?

Special equipment can be placed in the rooms upon request.

What business amenities do you offer?

In-room printers, scanners and laptops are available on request at the Front Desk. For business events, we offer 30,000 feet of function space including two large ballrooms and smaller meeting rooms. Our dedicated catering and events coordinators will assist you with all of your event-planning needs.

How can I plan a special event?

Our hotel's main ballroom can accommodate a sit-down dinner for up to 200 guests, while our more intimate meeting rooms are the ideal spaces for conferences of up to 10 people. Please contact the Catering & Events department who will be happy to assist you with all your event-planning needs. For any additional information please refer to our Meetings & Events page.

What are the parking options at the Hotel?

Our guests can make use of our daily parking area for EUR 55 per day with unlimited in and out privileges.

What are my travel options from the airport to the property?

From the airport, we can arrange a private transfer directly to the Hotel, which is about 25 minutes away. Limousine and taxi services are also available. Please call the Concierge to assist you in confirming rates, or visit our Destination page for more information.

What activities or experiences do you offer for couples?

Couples are sure to enjoy specially tailored Spa treatments in our Couple's Room. Romantic dinners can be arranged in different locations of our hotel or in a magnificent terrace on the Ponte Vecchio, exclusively open to Four Seasons Firenze's guests. For more details and options, please visit our dining page.

Do you have a pool(s) at your hotel?

We have one outdoor pool open during the summer season from 8:00 am until sunset, as well as a heated spa tub opened all year round from 11:00 am until 8:00 pm. A steam bath, sauna, ice fountain and emotional showers are available for guests.

What attractions are nearby? What is the best way to get there from the Hotel?

Four Seasons Hotel Firenze is located in the city centre. We are an easy walk from shopping and art attractions like the Accademia, the Uffizi Gallery, Piazza Duomo, Piazza della Signoria and other historical attractions. There are also many dining options nearby and reachable within a short taxi ride. Please see our  Destination page for more information.

What teen- and kid-friendly activities does your hotel offer?

Four Seasons Hotel Firenze offers a variety of activities for children and teenagers during the summer season as well as in-room welcome amenities. We also offer kids entertainment during Sunday Brunch, and babysitting service is available upon request. Mini slippers, mini bathrobes and special dining menus are also available. Child-friendly activities in the city can also be arranged by our Concierge.

Does your hotel have any historical context?

Four Seasons Hotel Firenze is comprised of two Renaissance buildings: the "Palazzo della Gherardesca" of the 15th century and "La Villa" of the 16th century. As an urban resort nested in the bustling city centre of Florence, it stands just a few steps away from the city's main historical attractions and it is set within the walled tranquillity of Florence's largest private garden. The property is considered a living and contemporary museum with magnificent pieces of artwork and unique designs. Frescoes, bas-reliefs, stuccoes and silk wallpapers have been carefully restored to reveal vivid detail dating back over five centuries. Original works of art and architectural detailing can also be found in several of the Hotel's 116 rooms, suites and hallways. 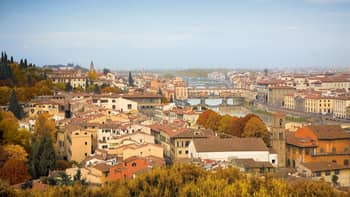