Yazan and Zain share their first dance to the tune of John Legend’s “All of Me.”

Glittering crystal chandeliers hang from the ceiling of the Grand Ballroom at Four Seasons Hotel Amman.

With every building in Amman finished in white limestone, the Jordanian capital has earned the nickname “The White City.” Fittingly, newlyweds Zain Shaban and Yazan Sharbain chose an all-white colour palette for their big day at the hilltop Four Seasons Hotel Amman. More than 600 family members and friends filled the Hotel’s Grand Ballroom for a winter wonderland–inspired reception, just as the December snow started to melt outside. “It was everyone’s first proper outing after the snow,” says Zain, the blushing bride. For their guests, the couple created a magical evening out.

The Scene: Zain and Yazan exchanged vows in a traditional ceremony at a local church before hosting an extravagant soirée inside the marble and granite Grand Ballroom at Four Seasons Hotel Amman. “We transformed the room from an ordinary hotel interior to a wrapped-up white canvas outlined with reflective elements that gave a glamorous shimmer,” says Zain. The simplicity of creamy white roses and many flickering candles sent a romantic glow through the space, which was filled with a combination of round and long dining tables as well as sumptuous sofas and stools for lounging. A heated tent on the Grand Terrace held an elaborate buffet with live cooking and carving stations.

Magical Moments: Zain and Yazan glided across the dance floor to a version of John Legend’s “All of Me” featuring violinist Lindsey Stirling. “It was so beautiful,” says the bride, who chose to kick off the evening’s performances with singer Manal Mallat, followed by a saxophonist during the meal. “After dinner, we had two famous Arabic singers, Assi El Helani and Melhem Zein, who sang our favourite songs,” she adds.

The Bride and Groom: Social media brought the happy couple together. “We met on Facebook,” says Zain, who recalls their first official date—a sushi dinner—with a laugh. “I’m a very sloppy eater, and sushi didn’t help at all, so the date was mostly spent laughing at all the food I spilled.” A year and a half later, Yazan proposed to Zain at one of the couple’s favourite spots—the private garden at his home.

The Bride Wore: The winter bride dazzled in a diaphanous Vera Wang gown, which inspired the lacy design of the couple’s wedding cake. However, it was Zain’s spunky footwear that stole the show. “I wore custom Converse sneakers with lace, crystal, rhinestones and pearls,” she says. “They were to wear when my feet got tired, but on the morning of the wedding, I put on my silver Jimmy Choo heels and decided I couldn’t spend my day in them!” Completing her wedding look was a white gold watch, a wedding-day gift from her parents-in-law.

A Personal Touch: Local wedding traditions call for the bride to be escorted to the church by her soon-to-be-in-laws.“The groom’s family comes to the bride’s house before the church and picks her up while the groom and his best men wait at the church,” says Zain. Her parents adorned their staircase with hundreds of blooms for their daughter’s symbolic departure. 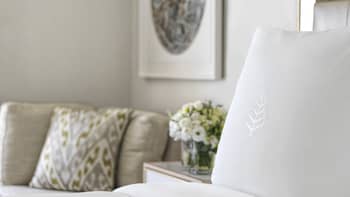 Get to know our newly renovated Superior and Deluxe rooms with 10% off our Room Rate.

Flowers cascade down the stairwell at the home of the bride’s parents.

The bride and groom gaze into each other’s eyes.

The beautiful bride in a swirl of creamy white tulle.

Yazan and Zain say “I do” during an elaborate ceremony at a church in Amman.

A white rose boutonnière for the groom

Ring bearers and flower girls march down the aisle.

A rosary is pinned to the bride’s bouquet.

Yazan and Zain hold hands during the ceremony.

The dance floor sparkles with the light of chandeliers.

The bride and groom

A lounge area allows guests to relax between dances.

The newlyweds raise a glass of Champagne in celebration.

All eyes are on the couple during their first dance.

The winter wonderland theme is enhanced by ambient lighting.

Yazan and Zain enter the ballroom for the reception. 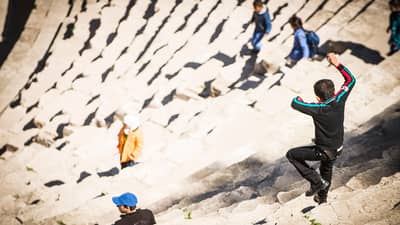 Things to Do in Amman With Kids

The Concierge Manager at Four Seasons Hotel Amman shares travel tips and recommendations to make your stay in Amman a memorable one.